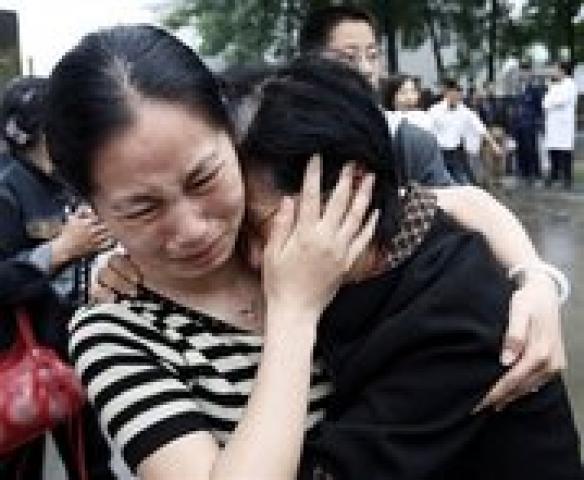 BEICHUAN, China – China said the death toll from last week’s powerful earthquake jumped to more than 51,000, as it appealed Thursday for millions of tents to shelter homeless survivors
The confirmed number of dead rose to 51,151 – a jump of almost 10,000 from the day before – Cabinet spokesman Guo Weimin told a news conference. Another 29,328 people remained missing and nearly 300,000 were hurt in the May 12 quake centered in Sichuan province, he said.

The disaster also left 5 million people homeless and leveled more than 80 percent of the buildings in some remote towns and villages areas near the epicenter. In bigger cities whole apartment blocks collapsed or are now too dangerous to live in because of damage and worries about aftershocks.

“We need more than 3.3 million tents,” Foreign Ministry spokesman Qin Gang told reporters, adding that 400,000 tents have already been delivered. It was the second call for tents from China in recent days.

As the misery of survivors wears on, China’s leaders moved to contain the political fallout from the deadly earthquake, promising a $10 billion reconstruction fund, reining in the media and trying to keep despair from turning to anger in the disaster zone.

State-run media, which conducted unusually probing reporting in the first days after the quake, have shifted to a more positive tone. Families in at least two towns where schools collapsed, killing their children, have protested or threatened to take local officials to court, suspecting shoddy construction.

In Beichuan, the smell of bleach was overpowering as rescue workers in white safety suits sprayed disinfectant in the area. Villagers were picking up medicine from stands set up by the government.

The town’s government offices opened Thursday at a hotel in neighboring Anxian county.

“Our previous office buildings collapsed, but our responsibilities, never,” Ma Yun, head of the county’s administrative office, was quoted as saying by the official Xinhua News Agency.

Blocked streams, earthquake-loosened soil, mudslides and the upcoming rainy season create the risk of secondary disasters that can make relief work and rebuilding even more difficult, officials with the Ministry of Land and Resources said Thursday.

Avoiding further geological disasters during relief work and rebuilding will be a “daunting task,” said Yun Xiaosu, vice minister of land and resources.

The earthquake and aftershocks created 34 lakes, known as barrier lakes, as debris blocked rivers and streams throughout the earthquake area.

“The dangers at the barrier lakes are severe,” Yun said. “The water level in some lakes is high and rising. If there’s a break, it will cause severe damage.”

People who might be in the way of breaks already have been evacuated, he added.

The torch relay, a symbol of the country’s hopes for the Beijing Olympics, restarted Thursday with a minute of silence at a container terminal in the eastern seaport city of Ningbo. The torch run has been toned down in the wake of the quake.