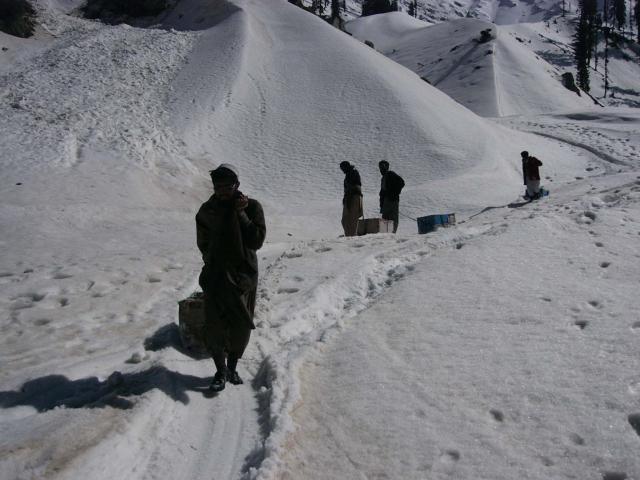 Only land route of Chitral closed at Lawari top for all type of vehicular traffic after heavy snowfall. CHITRAL: The only land route connecting Chitral to other sorts of the country was blocked at Lawari pass after heavy snowfall on Tuesday Evening local police told this scribe. The Lawari top was closed third time this year due to snowfall in October, November and December. As a result Chitral remained disconnect from other parts of the country. Besides it Chitral Gilgit road was also blocked at Shundoor pass after heavy snowfall. As well as scheduled flights of PIA (between Chitral Peshawar and Islamabad) also suspended due to bad weather as a result thousands of Chitral people have been strained at Peshawar waiting for conveyance to travel Chitral. Longest and unscheduled load shedding of 12 to 14 hours have nuisance the people of Chitral. Pesco officials disconnecting electricity supply by removing links of Transformers and connect it after 12 hours while the local people stressed upon for minimize load shedding from 12 hours to 5 or 6 hours. After closing of Lawari top transportation of all edible things also suspended and the hoarders looting the poor people with both hands by high prices of essential items. As these essential items are not available at Utility Store like flour, pulses, Ghee, dry milk, etc. Rain is continuing since Tuesday evening with short break while peaks of mountain received snow. Some 6 inches to 1 foot snow recorded at the top of Lawari pass. Talking to this scribe National Highway Authority official told that Lawari top would be re-opened if less snow received and weather was clear soon after snowfall. Essential edible thins not available in local market which have been underground by hoarders to high its prices. Liquid Petroleum Gas Cylinders also selling here in previous high price despite decreasing its rate in national market. There is acute wave of cold weather in Chitral and inhabitants of the area have been besieged in their houses. Resident of Chitral have appeal to provincial as well as federal government for provision of LPG Gas Cylinders on subsidize rates to save forest from cutting in-mercifully as well as to provide relief to common people. They also have demanded for opening of Kunar Road via Afghanistan through Jalalabad. The inhabitants of Chitral also appeal to high ups of NHA for early completion of excavation work of Lawari Rail tunnel and to allow the local people to travel inside the tunnel in winter season. G.H. Farooqi PO Box No. 50 GPO Chitral Pakistan phone No. 0943 302295, 414418, 03025989602 Website: www.dailychitral.com Email: gulhamad@gmail.com,gulhamaad@yahoo.co.uk, gulhamad786@hotmail.com