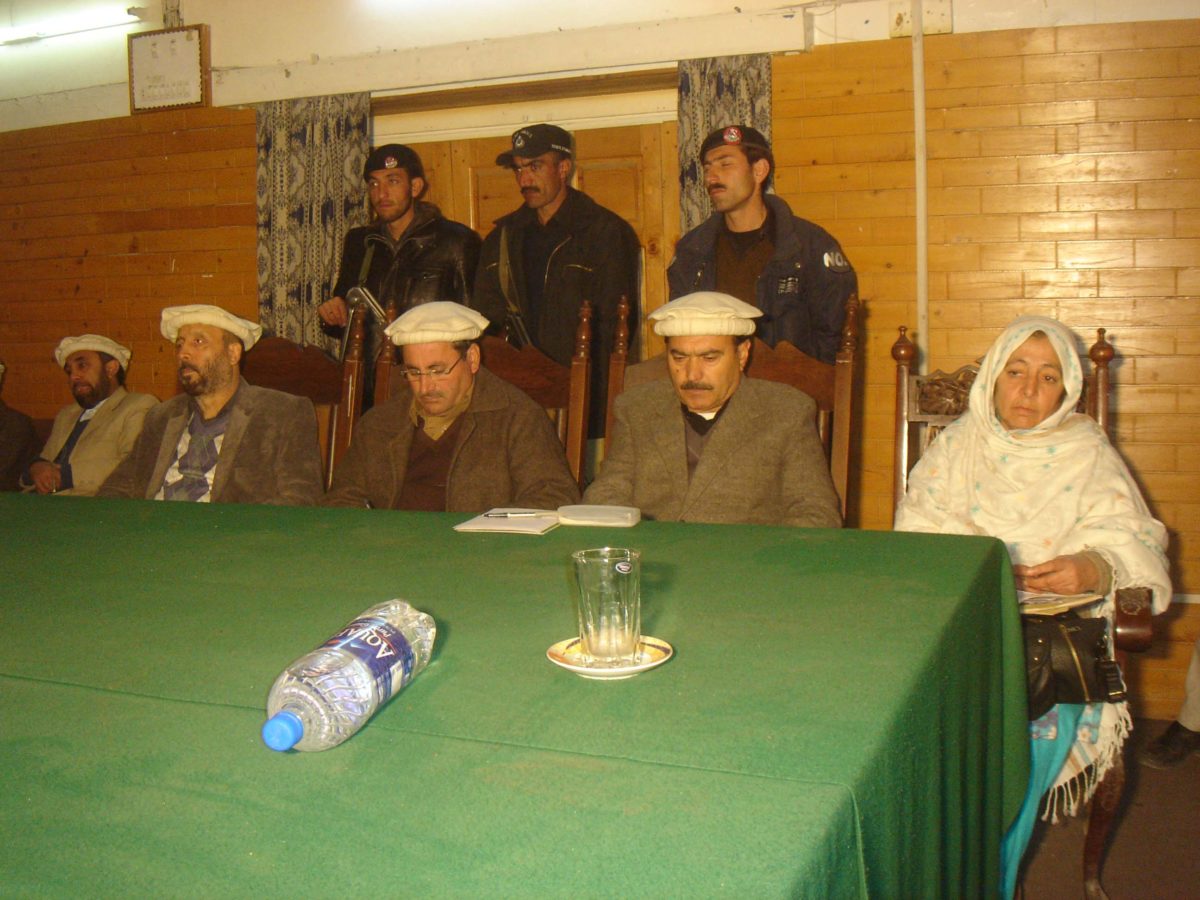 Selling of Narcotics openly but no action against them, Chitral police strongly criticized in open Kachery (Forum). By: Gul Hamaad Farooqi CHITRAL: An open Kachehry (Forum) was held at Town hall Chitral under the chair of Deputy Commissioner Ameenul Haq. Which was attended by heads of all line department including DSP headquarters Khalid Khan and MPA Saleem Khan. The open kachery was held to listen problems and grievances of public and to solve them on the spot. President of Town power committee Hayatullah Khan strongly criticized Chitral police for supporting drug traffickers. He said that Hashish and other narcotics are selling openly in different parts of Chitral which I can point out but police never raided on these selling points to stop openly selling of narcotics. He strongly criticized poor performance and criminal negligence of Chitral police for taking no action against these drug traffickers. He said that Hashish selling in different places even near to police station Chitral but it is strange that what role play by police ?. Our young generation badly indulging in drug addicting he added. He demanded from district administration as well provincial government to take stern action in this game to save the young generation from drug addicting.. DSP Headquarters Khalid Khan was present there during complaints of Chitral police. Aftab Ahmad of PTI raised an issue that local contractors submit their bills after completion developmental works but C&W and other department’s staff says that they send these bills to Deputy Commissioner Office for approval where his staff get bribe and not approve these payments without bribe. Hence DC denied these allegations on the spot and strictly ordered that staff involved in this evil will be dismissed from service. Elites of other areas pointed out that millions of rupees were spent on Golain water supply scheme but people are still deprived from potable drinking water. By pass road could not completed in 5 years and people living on road side are suffering from different diseased due to dust. Abdul Majeed Queshi, Ghulam Hazrat Advocate and other said that Kalash valley road has damaged at 2 places in 2012 as a result traffic passing through territory of a local person who get tax from vehicles but C&W badly failed to restore traffic through its main road. Abdul Rehman said that there is only 1 doctor in RHC Ayun instead of 3 and patients badly suffering. Low voltage of electricity also strongly criticized. Fazli Rehman chairman of Booni said that Lawari top will be closed due to snowfall in this month and Lawari tunnel should to open for traffic at least 4 days a week. Elites also criticized poor performance of government schools and complained of absent staff and subletting of duties. Elites also strongly criticized poor performance of Communication and works department, public health department as no scheme of them is successful and most of their schemes badly failed. They also complained of other departments and demanded for reform and to bound the staff to render services to public instead of filling their pockets. A large number of people attended open Kachery and demanded for organizing this series in different parts of Chitral. Gul Hamaad Farooqi C/O Manager bank Islami Main branch Chitral Pakistan phone No (0092) 0943-320737, 0943-316052, 0943-414418 ,03205989602, 03025989602, 03337069572, 03159698446, 03469002167 email: gulhamad@gmail.com,ghfarooqi@rediffmail.com, gulhamaad786@yahoo.co.uk,ghfarooqi@rediffmail.com