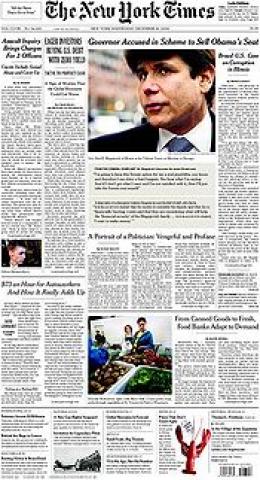 Six months ago the popular newspaper announced that it was closing its print edition but will continue publishing online. Its circulation was down to about 50,000 when the announcement was made.

Editor John Yemma said the award-winning newspaper will still print a weekly edition for subscribers and a printable three-page daily news digest by email but the main focus will be on its website, CSMonitor.com.

He said visitors to the website, which currently attracts more than two million unique visitors a month, should not expect an immediate and dramatic change overnight but a steady improvement over time.

"It’s not like we have new flash graphics or anything going up," Yemma told AFP. "I’m sure we’ll have to struggle to find our feet in the first couple of days

The new Web-based edition will not charge visitors to its website unlike others including the Wall Street Journal.

Early this month a major newspaper, the Seattle Post Intelligencer, gave up its print edition but will continue publishing online.

Last month another major newspaper, the Rocky Mountain News, closed shop to join at least six other newspapers that either declared bankruptcy or shifted to web-based publishing.

In a related development, a Maryland congressman filed a bill in the US congress to bail out losing newspapers. If the bill becomes a law, losing newspapers will operate as non-profit organizations.

The print publishing business is one of the hardest-hit industries in the US that experienced major company closures due the current economic downturn.

Filed under: Business, Media & Tech
Share Tweet Pin G Plus Email
previous article: Pacquiao Must Run and Dance to Win Over Hatton
next article: Op-Ed: US Drone Attacks on Pakistan Continue, A Shame on the United Nations