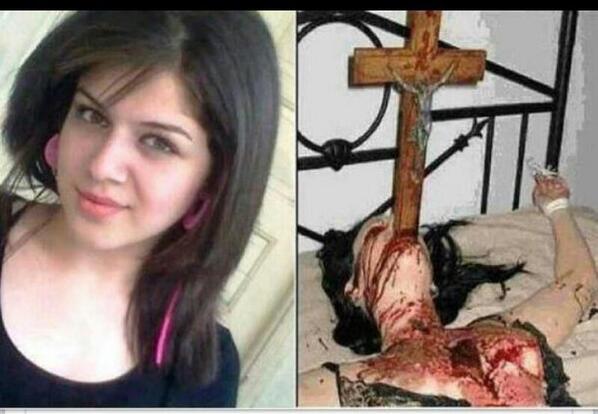 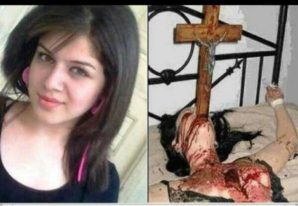 A Christian girl was killed by US backed Free Syrian Army rebels who jammed a crucifix down her throat – after they viciously raped and tortured her.

On December 3, 2013 Rep Adam Schiff of California asked for and was granted permission to address the United States House of Representatives for a few minutes regarding the plight of Christians in Syria.

“Mr. Speaker, as winter descends upon the Middle East, the plight of Syria’s people who have endured nearly 3 years of savage civil war grows more desperate with each passing day.”

“Fighting rages on throughout much of the country, and with the government forces making headway in recent months, many of the rebel groups have splintered, turning on each other. As in wars throughout history, it is civilians, especially children, who have borne much of the suffering.More than 9 million Syrians are in need of humanitarian assistance, and a quarter of these, 2.2 million, have fled the country, mostly to neighboring Lebanon, Jordan, and Turkey. Half of those refugees, more than a million people, are children”, he said.

“Another 6.5 million Syrians are internally displaced, having fled their homes, but remaining inside the country, often in parts of Syria that have changed hands on multiple occasions and with attendant civilian suffering. While all of Syria’s people have been affected by fighting, it is Christians, who make up about 10 percent of the country’s population, who are at greatest risk, given their small numbers and the increasingly religious nature of a war that started out as a broad-based secular movement that sought to change the character of the Syrian regime but not the regime itself”, said Schiff.

For two millennia, Syria has been home to one of the oldest Christian communities in the world, a population dominated by the eastern churches, but also including smaller numbers of Catholics and Protestants. Syria’s Christians have been comfortably and fully integrated into the economic, political, and cultural life of modern Syria and, despite their small numbers, are well represented among the country’s elite. Tragically, this long, peaceful coexistence has been shattered, and half a million Syrian Christians, nearly one in four, have fled the country since the fighting began.

Like minorities the world over, Syrian Christians have tried to avoid getting dragged into the fighting that has gripped their homeland; but with their top two population centers, Aleppo and Homs, having seen some of the most savage fighting in the war, Christians have been unable to avoid being drawn into the conflict”, said Rep. Schiff  (source: Congressional Record http://thomas.loc.gov).