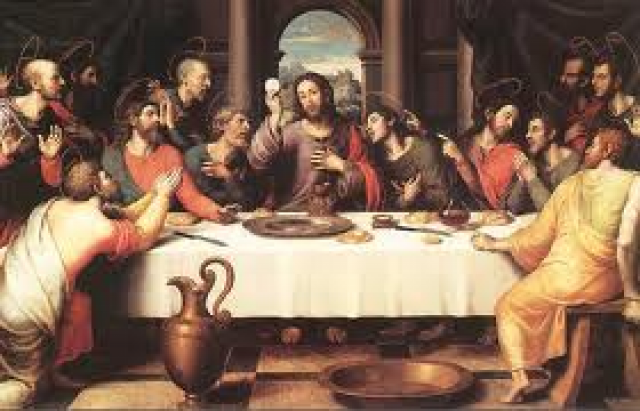 Wednesday night, the last night of rehearsal for Holy week, I’m sitting preparing my music, putting it in order. For any church choir member, if they are truly appreciative of the sacrifice of Jesus and love him as I do, and if they truly love the work that they do as choristers, then this is thee most difficult, gruelling rehearsal that they will do, as so many mixed emotions have to be both fought back, suppressed, and expressed as the music is being performed. It is not merely a matter of opening one’s mouth to make a pretty sounding noise.

Holy Thursday Evening, The Lamb Of God Is Led To The Slaughter First comes Thursday’s Betrayal, and My Lord being handed over to those….. Now there is an evening in history to remember. Suddenly emotions of hatred, anger, frustration,loathing, and rage, begin coursing through me, as I begin recalling one by one the various Bible accounts of that time so long ago.Then feelings of sorrow, pity, sadness, more anger, deeper frustration fill me.

There’s Jesus with his Apostles, breaking bread, and Jesus offers the first sop to Judas and then dispatches him to do what Jesus knew he had to do, in order to fulfill the scriptures. Off goes Judas to the house of Caiaphas to discuss the whole ordeal. I can still hear in my mind the words of Caiaphas ringing in my ears as he tells Judas that it is far better to sacrifice one innocent man, to spare the lives of all the people, and in my heart of heart’s I curse him for having said it, for knowingly condemning innocent Jesus to death.

I then see Jesus, kneeling, praying, in anguish in the Garden of Gethsemane, asking Our Father if it is truly necessary to be crucified, but realizing that His Father’s will must be fulfilled. Father God is silent. His prayers were so intense it is reported that beads of blood had broken out on his countinence, and what are Peter James and John doing, are they vigilant, No. They have fallen asleep.

Judas finally arrives with Caiaphas, some other priests, and temple guards, and of course Judas, so that Judas can point out Jesus. This makes one wonder.

I ponder it in my own mind, but cannot fathom it, How blind and stupid, is the High Priest, who has witnessed Jesus many a time in the streets as well as the synagog, and knows him well, well enough that he wants to sacrifice him, yet needs Judas to point him out? I immediately remember that it is in the fulfillment of prophesy, yet still the question remains. How stupid and how cowardly is this man that calls himself Caiaphas the High Priest? Then it dons on me the truth. Caiaphas is offering up Jesus to the Romans to Pilate, in order to prevent Rome from destroying the Hebrew Nation. It is better to sacrifice one for the sake of the many. Jesus is a skape-goat for the masses.

My mind then begins seeing My Lord being dragged through the streets to Herrod where he is accused by the High Priest but Herrod has no authority to crucify Jesus, but still shames and humiliates him by scouraging him, and places a crown ot thorns and a purple robe upon him mocking him. My anger begins to boil over. How sadistic can this man be to treat the Son of God in this fashion. His arrogance has blinded him to the truth.

Good Friday One Day to Never Forget   I begin to ponder in my troubled, angry mind, what is so good about My Lord being dragged through the streets from Herrod’s court to the court of Pilate like some common criminal, being mocked and made fun of as they go, and I think to myself in anger, and pity, The Son of God, my Jesus, does not deserve such horrific treatment. He’s done nothing wrong to warrant such treatment.

The truth about why we call it “Good Friday” is the fact that Jesus sacrifices himself taking our sins upon himself and totally forgiving and cleansing each one of us.

Betrayed, Beaten, Humiliated, Shamed, Falsley Accused, Jesus stands before Pilate, who is totally confused as to why Jesus has been brought to him. He questions My Lord at length, trying to discover what he has done so wrong to warrant Caiaphas and the crowd demanding Jesus crucifixion. What possible law could this man have committed to deserve being put to death, in such a manner, but Jesus offers him no explanation except to express that He is a king of a kingdom that is not of the world Pilate has any control over.

Frustrated, Pilate finally washes his hands of the matter, and offers the High Priest and followers of the High Priest a choice according to local tradition of freeing either Jesus or Barabas, also named Jesus, and the crowd calls out for Jesus Crucifixion.

My thoughts are screaming out for me, to jump onto this page and stand in defence of my saviour, but I am so frustrated, and powerless to do so. There is nothing that I can do, but, through my musical talents and ability do my best to express all of the emotions, I am feeling.

Saddness and frustration, anxiety, pity, hatred, fear, and love fill me, as I watch Jesus trudging through the streets towards Galgatha, Calvary as we know it, dragging that heavy cross. His head wears the crown of thorns, and there is blood oozing from where it has puctured the flesh, mixing with the sweat and tears, that stream down his forehead and face. His body is marked with the lash marks of the soldiers, the flesh ripped and bleeding.

To face a punishment for sins,crimes he never committed, is ripping me in two. I think to myself, It’s just not right, how could A loving God, permit this to happen to His only begotten son? And then I realize it was for me and all like me. I ask myself how do I deserve such love?

I see him fall three times, and hear the crack of the soldier’s whip as it strikes my Lord again and again and again, and wish that I could receive the lash in his place, as I am a sinner, he is not. I can hear the mixed emotions of the crowd, the pharisees crying for his death, and the sobs of those begging for pity to an innocent man. Finally Simon takes up the cross. Jesus is suffering so much he can no longer manage to carry it.

Finally we are at the top of the mount. Anxiety,fear,guilt,remorse,repentence. Now what’s going on within me why am I feeling these emotions, but wait, No! I can’t watch this, I don’t want to see this. No! No! Those soldiers are actually crucifying Jesus. Someone anyone help him. My eyes are closed. I don’t want to see this. But I hear a small voice from within me saying, “How can you sing about this with the passion and pity and yes love it deserves, if you don’t watch? Open your eyes. See how he suffers, suffers for you and for every sinner.”

My eyes filled with tears open, to watch the soldier ruthlessly, driving the nails into his hands and feet, and nailing some sign at the top. The soldiers pull the cross raising it until it settles in its hole.

Weeping now from the women gathered round, is the only sound now that can be heard. Suddenly My Lord cries out to God. “Father Father ! Why have you forsaken me? Yet He already knows the answer to the question.

By now it is mid-afternoon around three o’clock. Suddenly the skies over head blacken. The son is totally blocked out. Again My Lord calls out to Our Father God, this time though, it is a cry for mercy, but not for himself. “Father, forgive them for they know not what they do.” Finally after a few seconds longer of anguish, pain and torture, we hear Jesus say, to James and Mary. “Behold thy mother. Mother behold thy son.” and in his last breath, we hear him say, “It is Done, Father into thy hands I commend my spirit.” All of mankind’s sins he has endured and he dies. Saddness, pity, gloom fear, and anger runs rampant through me.

After making certain that Jesus was dead by piercing his side, the soldiers agree to release him to be buried in a nearby tomb, and the tomb is sealed, and guards placed nearby, for there were rumors that he was supposed to arise and the didn’t want the body stolen to fulfill the rumors. All one can feel now is remorse, and sorrow for Jesus is dead.

But this is not the end of the story though, for a miracle is about to take place.

The Sabbath has passed, and Mary Magdelaine wishes to make sure that Jesus is still in the tomb, so she goes to where Our Lord had been buried. But when she arrives, she sees the guards still asleep, and the huge stone that covered the entrance to the tomb is rolled away. She runs near the entrance and sees that the tomb is empty, there is no body to see.

Then she spots a man leaving the area and runs to ask if he has seen her Lord, to discover joyously that the stranger is none other than Jesus Arisen. Halleljuliah to God and to my Lord Jesus the Risen Lord! Such emotions of joy, happiness, elation, love, surprise, and even awe, fill one’s soul on such an occasion.

As a choir singer for the past 50 years, each time I have to prepare for this rehearsal and work through it, I as a chorister must be prepared to mentally travel step by step through every part of this story and permit my thoughts, my feelings, my emotions to become so rawly exposed to each and every step of the story, in order to be able to express with passion and love every nuance that takes place. It is not merely opening my mouth to make nice sounding noises.

Oh yes, if you are a choir singer, remember one important thing, Breathe!