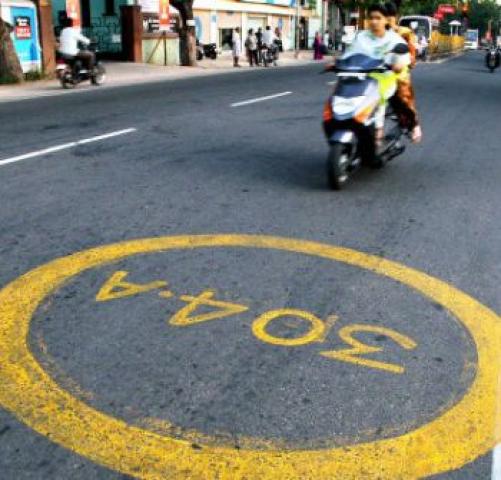 In a split second, a traffic crash transforms forever the life of a family. Behind each statistic, there are fathers and mothers, sons and daughters, brothers and sisters, grandchildren, colleagues, classmates and friends – WHO

Shefali Mishra: quality consultant, beloved wife, and mother of two young daughters. One evening, she stopped by to buy greens at a roadside shop on Nanjundapuram Road. While starting her bike, a vehicle rammed her from behind.

Selvaraj: Aged 60, father of two unmarried daughters. He was walking on the central median near Ondipudur waiting to cross the road. A bus that lost control while coming down the flyover hit the median and then him.

Karthik, 19, from Madurai was working in a courier company to support his parents. While returning after work, his two-wheeler was hit by a vehicle, and he was dragged for over 20 metres. No help came from the shops nearby. A few pedestrians pulled him out from under the bus and rushed him to hospital.

All that remains of these people today are three bright yellow circles, drawn at the spot where they met with fatal accidents. If you have not noticed these circles with the words ‘Fatal’ or ‘304 (A) IPC’ (Indian Penal Code 304 A reads as Rash and Negligent Driving causing death) scrawled on them, do so from today.

The circles represent the lives lost on the roads of Coimbatore due to negligent driving. So far, more than 400 have been painted in the city. And, each has a tragic story behind it. They tell you tales of errant drivers and riders, and families that were shattered because of their mistakes.

Inspector S. Albert, Inspector, Traffic Investigation Wing, Coimbatore City, has dealt with more than 200 fatal cases in the six months he has spent in this department.

He remembers most of the victims by name, age, and what caused the accident. Most importantly, the faces of the victims’ family continues to haunt him.

“A breadwinner cannot be created. And, when the head of a family dies, it throws the family into deep socio-economic trauma, from which getting out is very difficult,” he says.

This is one of the reasons why the city police has carried out sensitisation drives for bus operators and bus drivers.

For, buses and lorries account for over 40 per cent of road fatalities.

The drivers have been told to respect rules and protect lives. Also, more than 10,000 pamphlets on road safety and yellow circles have been handed out to schools, colleges and government institutions.

And, the circles seem to have worked in creating awareness about fatal accidents.

City Police Commissioner C.K. Gandhirajan says that while earlier people did not know what the circles meant, they have now understood their significance and learn to be cautious on the road.

Spearheading an effort to popularise this day in this part of the country are the Youth Task Force (YTF), an NGO, and the Accident Research Centre led by S. Suresh.

They have made efforts to ensure better road environment to save human lives and reduce the financial damage caused by road accidents.

“There are three possibilities in an accident – trauma, disability and death. Things no one should ever experience. And, it is actually easy to eradicate road accidents,” says Suresh.

Just doing away with potholes and loose stones can prevent many accidents.

For, he adds: A vehicle is meant to take you somewhere, not kill someone.