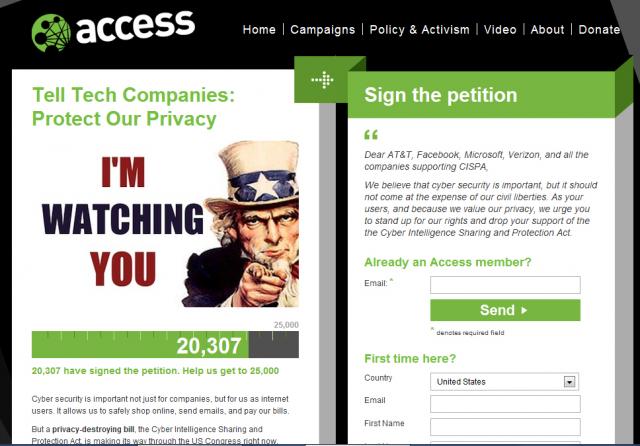 Access Now.org  a global Movement for Digital Freedom has launched a new campaign, Protect-our-Privacy  highlighting the issue of Cyber security and sharing in the internet world.

According to them, “Cyber security is important not just for companies, but for us as internet users. It allows us to safely shop online, send emails, and pay our bills. But a privacy-destroying bill, the Cyber Intelligence Sharing and Protection Act, is making its way through the US Congress right now. Cyber Intelligence Sharing and Protection Act (CISPA) would allow for the unlimited sharing of personal data amongst and between private companies and the government, without a single safeguard for privacy or civil liberties. If CISPA passes, it will set a dangerous precedent for the rest of the world. Technology companies who are currently supporting CISPA, like AT&T, Facebook, Microsoft, and Verizon, should be protecting us from cyber security attacks but not through these methods. What we need to do is convince them of something we already know: Protecting us against cyber threats should be a priority but should not come at the expense of our civil liberties.”

“Reality of today no matter where you live, cyber security is vital to internet usage, it allows us to safely shop online, send emails, and pay our bills. CISPA, though, is so vague that the US government and companies would be able monitor your online communications, censor information, and shut down internet access. There is a better way — one that narrowly defines the roles of companies in fighting cyber threats, limits what information can be shared, and doesn’t open the backdoor for governments to spy on us. That’s why we’re writing an urgent open letter to the nearly 30 companies supporting CISPA, asking them to stand up for the rights of their users and drop their support of the CISPA. Sign the petition and we’ll deliver these letters to all the companies supporting CISPA before the Act goes to the vote.”

Though the technological barriers like Digital Divide and Net Neutrality certainly affects and prolongs us in different aspect of standardization. In such scenario CISPA certainly gives a right hand power of controlling the internet within few hands which would further creates gaps in between the developed and the rest.

Taking control in the name of cyber security doesn’t justify the whole process of standardization. Manipulation like this has been going on within the developed nation where still today technology is very expensive in the third world and barriers like these will certainly help few developed nation and few organization to create and manipulate the situation and market. “Internet for all” and its effectiveness will just be limited with in slogans and agendas.