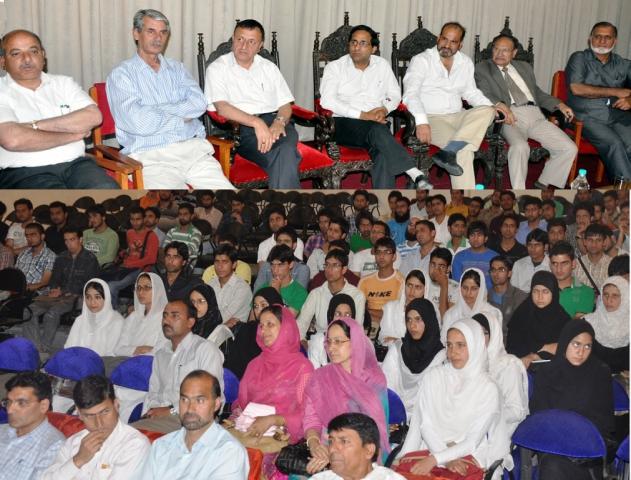 Highlighting the role of all citizens of the valley particularly people living in the Srinagar city to shape the city as one of the ideal symbol of heavenly Kashmir, the Intellectuals, Scholars, Educationists,  Industrialists,  Administrators, Principals, Students, pro-environment activists and Scouts assembled in the historical S.P College and unanimously expressed  their views.

The challenges faced by in front of environment were discussed.

The speakers underscored the need of rejuvenating anti-Polythene campaign and Dog menace which is posing threat to people at large scale living in Shahre-e-Khas were topics of various speakers.

Earlier in his inaugural speech Principal S.P.College Prof. Zahoor Ahmad Chatt said that the institution has been actively associated with an array of activities for conserving environment. He informed that the Green Club of the College has taken up various initiatives for spreading awareness about environmental conservation. He exhorted upon the students to come forward for the cause of environment and preserve the beauty and natural wealth that the state has been blessed with.

Renzushah, while speaking on the occasion stressed on initiating an environmental revolution which involves active participation of civil society, adding that the cause of environmental preservation has assumed paramount importance in the present times. He asked youth to come forward and make a valuable contribution towards safeguarding the natural resources, adding that we all have to work in synergy towards achieving the goal of preserving nature and restore its pristine glory.

Shakeel Qalander KCCI President while speaking on the occassion stressed on proactive involvement of all the stakeholders in the drive to preserve nature. He said the goal of sustainable development has to be achieved while preserving and promoting the natural wealth which is facing depletion due to our callous attitude towards our environment. He appreciated the organizers for organizing such interactive programmes involving youth as they can effectively carry out the message and make society more responsive towards the need of environment conservation.

Imdad Saqi in his address appreciated the students for their contribution towards the cause and asked them to strengthen their drive for a better environment. He however raised his concern over the heap of garbage scattered on important roads also and said that immediate steps should be taken to remove them.

Students also expressed their views on the topic of environment conservation.