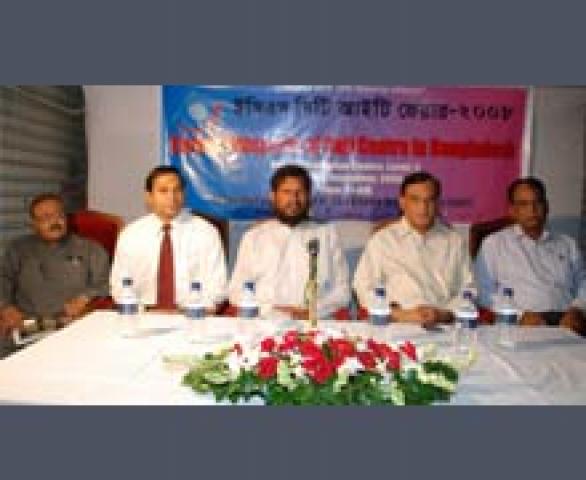 The City IT Fair is going on with lots of visitors at ECS Computer city in Multiplan Center, Dhaka.
Today it was the sixth day of that nine-days long arrangement. From early morning the event venue was crowded with hundreds of students from various schools and colleges.
A Seminar on Call Center Culture and its possibilities in Bangladesh was held today with Md. M Haider Ali, Chairman, Dept. of Computer Science, University of Dhaka as the Chief Guest. Former Ambassador Mr. M Kamal Uddin Ahmed and Group Captain Mr. M Mostafizur Rahman, CEO, ADAPMAX was also present in the seminar discussion. The Seminar was presided over by Mr. Toufique Ehsan, Convener of the City IT Fair 2008. The session was conducted by Engineer Subrata Sarker.
In his speech of Chief Guest Mr. Ali argued to take the chance to make Call Center a profitable sector for enhancing Country’s economy by using our low cost laborer market.
From tomorrow the fair committee will arrange debate competition with students of famous colleges of Dhaka City. The fair is open for all from morning 10 to 8 at night and continue till November 7th. Entry fee is taka 10 but free entry is offered for students.