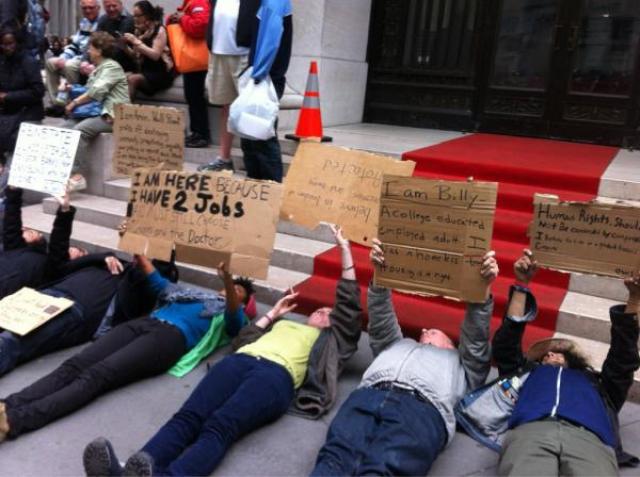 NEW YORK – I have come to three ‘Spring Training’ marches now—but today [April 20th] was by far the most exciting. The weekly marches on Wall Street have become increasingly well-organized and effective at getting occupiers in front of the stock exchange for the closing bell every Friday.

The marches are designed as a fun way to practice new protest tactics before May Day. The police stop us blocks away from Wall Street when we march in a group, so we have developed different tactics of going "civilian," breaking into small groups to penetrate the police lines that circle the stock exchange before reforming the protest on the other side. This week, when we began to arrive, there were many occupiers already there who have been occupying the steps to Federal Hall since they got pushed off of Wall Street earlier this week. The police had barricaded the steps and control access to what they officially refer to as the "first amendment rights area." Seriously, they really call it that. In addition to the NYPD, there were counter terrorism, federal park police and SWAT.

As the crowd swelled the police began making arrests and clearing the sidewalk. The police pushed aggressively and isolated everyone who had just arrived from the group that had been occupying the steps to Federal Hall, arresting at least three. Tension was high, but the crowd calmed before the people’s gong—our response to the closing bell of the stock exchange. We mic checked to the people behind police lines on the barricaded steps and celebrated together before breaking into the familiar chant, “A – Anti – Anti-Capitialista,” this time in the very heart of capital. There were police barricades and lines of officers keeping us apart, but there were a few hundred of us dancing right across from one of the most potent symbols of power; the energy was high.

A mic check broke our chant.

“Ten occupiers are laying down on the sidewalk right now, they know they will be arrested and wish to go peacefully!”

Two weeks ago a group began sleeping on the sidewalk, following the exact specifications for legally sleeping on the sidewalk as a form of protest from the the 2000 U.S. district court decision Metropolitan Council V. Safir. The occupation grew larger each night until last week, when the police started arresting people. The occupation shifted half a block to Federal Hall, which as federal property was beyond the jurisdiction of the NYPD. This was where the "first amendment rights area" had been set up. Direct Action had video cameras in place to film the occupiers laying down in accordance with the law, then immediately getting arrested for it.

"Mic Check! Next week we are going to invite everyone to come lay down!”

It was powerful. The NYPD has tried very hard to prevent us from growing roots anywhere in the city. The last few weeks have been filled with arbitrary arrests, sleepless nights and scant media coverage, but for the first time in a while, it felt like the tide was turning today; it felt like we were winning.

This story was orginally published on www.occupiedstories.com