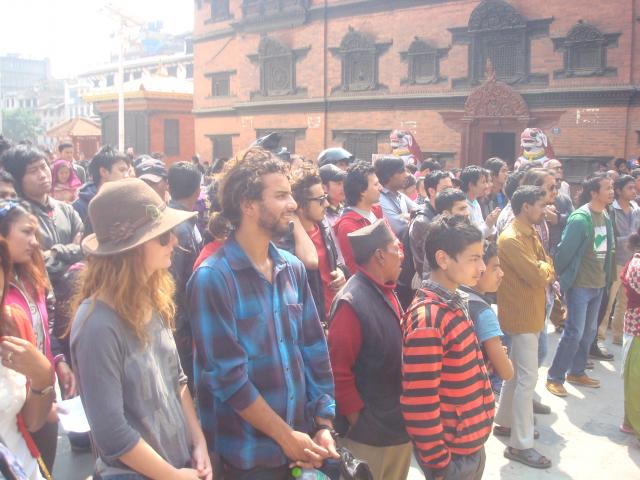 Saturday 9 March 2013: Fighting against the Nepal police atrocities, the facebook activists of Nepal organized a protest program here at Basantapur Durbar Square on Saturday. The program focused on highlighting the basic rights of citizens where different police victims shared their stories and showed solidarity to fight for their rights.

Pranav Shrestha, a student said, “Nepal Police is not accountable to the public. It’s high time we have to make them accountable to us because we pay the taxes and they have to listen and respect us. We don’t want them to praise us but we want our share of respect which we deserve. Just by having tattoos or piercing or growing our hair long. We do not want to be tagged criminals in fact it’s our basic rights which our constitution gives us to be who we are.”

According to Nepal Constitution 2063 Section 12 right to freedom

(1) Every person shall have the right to live with dignity, and no law shall be made which provides for capital punishment.
(2) No person shall be deprived of his/her personal liberty save in accordance with law.
(3) Every citizen shall have the following freedoms:
(a) freedom of opinion and expression;
(b) freedom to assemble peaceably and without arms;
(c) freedom to form political party or organisations;
(d) freedom to form unions and associations;
(e) freedom to move and reside in any part of Nepal; and
(f) freedom to practice any profession, or to carry on any occupation, industry, or trade.

On 25 February 2013, Nepal police randomly apprehended and manhandled 711 citizens, who had committed no crime, for the only reason that they had long hair and/or body piercings. Since then, many others have been arrested, randomly interrogated, and had their hair forcefully cut.

The huffington post Quotes, “Police in Nepal denied on Tuesday they had been targeting men with long hair as part of a drive against "hooliganism" in the capital that has seen more than 1,000 people arrested in the last week.”

Abhaya Subba Wise, one of the activist said, “It was heartbreaking to hear the victims of Police atrocity talking about their experiences and how one of them was even asked to describe his sexual relationship with his wife in gory detail!. The more saddening was the way they treated an HIV/AIDS patient, dragging him all the way and It was outrageous and appalling yet people are reluctant to ask for what has been theirs all along – their rights! I apologize to all the youngsters for the way you are being mistreated…I am sorry because a lot of good people are not doing anything for you and your humiliation!”

It is high time when Nepal Police realize that brutality is not just the solution to deal with every problem there are ways and means about how to deal with things and situations. Though Nepal Police have been rated one of the best in solving crimes but when it comes to maintaining public relation they have a weak tolerance and they show high level of carelessness. The Facebook activists standing for their rights is not just a question of one or two it’s the question for all citizens which needs to be addressed and researched.