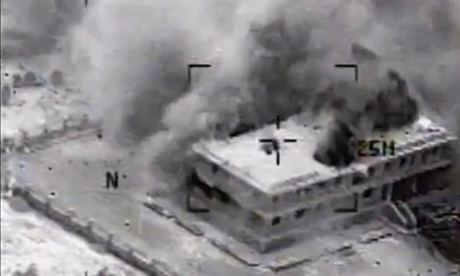 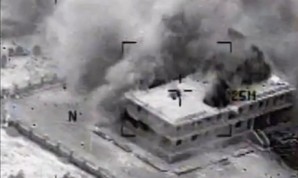 This still image made from video released by the U.S. Central Command on Tuesday, Sept. 23, 2014, shows a structure in Tall Al Qitar, Syria moments after a U.S. airstrike. In three waves of nighttime attacks launched over four hours early on Tuesday, the U.S. and its Arab partners made more than 200 airstrikes against roughly a dozen militant targets in Syria. Now comes report that innocent civilians have been killed. It is unclear if any of those killed as a direct result of the bombing were children.

At least 10  civilians have been reported killed in coalition airstrikes against Islamic State forces in eastern and northeastern Syria, according to a monitoring group. It is unclear if any of those killed were children?

The Syrian Observatory for Human Rights said Saturday that the “civilians” were killed in two regions – the eastern Deir al-Zor province and the northeastern province of al-Hassakah.

Seven people were also killed in an airstrike on a gas station near Koniko gas factory near the town of al-Khasham in Deir al-Zor province on Friday.

It is unclear if these were” human shields” being used by ISIS terrorists or so called “collateral damage.”

In al-Hasakah province, three civilians – including a child under the age of 18 – were killed when airstrikes targeted oil fields near Kabiba village, south of the province’s capital.

The US-led coalition started bombing Islamic State targets in Syria in September 2014. Since that time over 200 targeted airstrikes have been done by the US Air force and Navy in Syria and Iraq.

On Friday Pentagon officials stubbornly refused comment regarding civilian deaths in Syria. With one official insisting that reporting such stories are “counter productive to the cause of fighting the war on terrorism” (whatever the hell that means).

Filed under: Military, News
Share Tweet Pin G Plus Email
previous article: Syrian army retakes key positions near Aleppo in heavy fighting with US backed terrorists
next article: Police worry about pot candy being handed out to children this Halloween in Denver