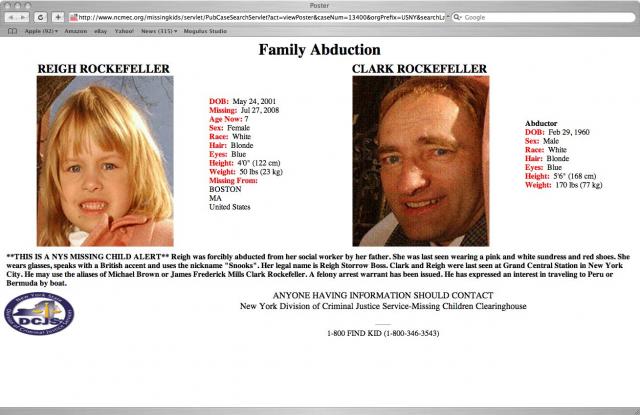 Massachusetts has issued an Amber Alert for the kidnapping of 7 year-old Reigh Rockefeller, presumably by her father, Clark Rockefeller.

Sources say that Clark Rockefeller took Reigh during a custodial visit, speeding away from Boston’s wealthy Back Bay neighborhood in an SUV. A supervising social worker tried to pursue the car and was dragged for several feet as he held onto the speeding vehicle.

Both the father, the accused kidnapper in this case, Clark Rockefeller, and the mother, Sandra Boss, are wealthy and notable Bostonians. Clark Rockefeller is a member of Boston’s prestigious Algonquin Social Club but has a mysterious background in which he is known for using multiple aliases. Sandra Boss is a successful partner at a global management company with ties to the Museum of Fine Arts in Boston and the Metropolitan Museum of Art in New York City.

Sources believe Clark and Reigh Rockefeller are currently in New York. New York authorities have not recognized Massachusetts’ Amber Alert, however, because, since the kidnapping is custodial, they don’t believe Reigh Rockefeller is in danger.

Sandra Boss and Clark Rockefeller were divorced in 2007 and Boss was granted custody of their daughter Reigh.

Filed under: US
Share Tweet Pin G Plus Email
previous article: Al-Qaeda in Iraq Down – But Not Out
next article: Search site aims to rival Google