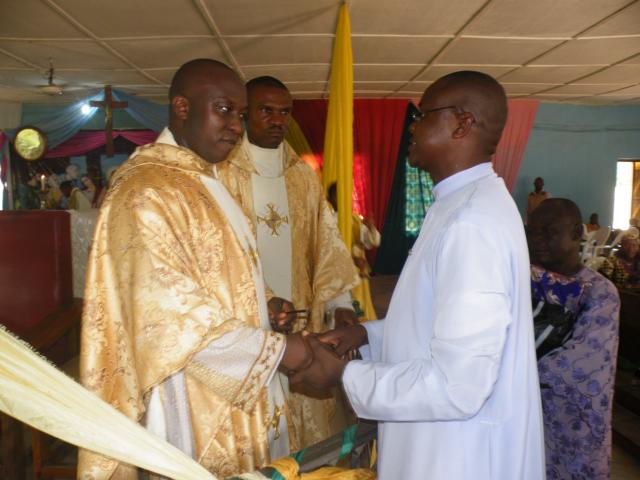 The former parish priest of St. Paul’s Catholic Parish Umuodagu Ntu in Ngor/Okpala Local Government Area of Imo State, Rev. Father Bethrand has called on Christians to be united as a body.

Rev. Bethrand made the call at a send-off and reception church service organised for him and the new parish priest, Rev. Father Cosmas  Edochie by the parishioners on 12th May, 2013, as a way to appreciate him for a meritorious 6 years of service in the parish.

Using the broom to drive home his massage of unity, the clergy said when Christians stand as individual entities, just as a single broom stick, they can easily be defeated but when they are united as a collective indivisible entity, they will be in good position to overcome any threat  and emerge victorious because Igwe bu ike (multitude is strength)

Rev Bethrand noted that though there is diversity in our various lives, there is need for unity among Christians which will bring about peace and development for the good of the society.

Reading from the gospel of John 17:20-26, Rev. Bethrand charged Christians to love one another just as God loved Jesus Christ.

“On his arrival on February 20th 2007 Rev. Fr. Bethrand Ujunwa left no stone unturned but quickly galvanized the people into action. By his efforts and in consonant with the efforts of the parishioners mostly the CWO, the parish house was completed, well-furnished along with the Boys Quarters. In no distance time as he came with the financial assistance of his non-parishioner friends – Mr and Mrs Emma O. Agbachi, MD. A.O. Emmaco Global ltd and others put in place a befitting Chapel which ranks second to none in the Archdiocese.

He started a Nursery/Primary School and within one year, he provided a new and standard structure, an edifice to accommodate the school pupils.

Rev. Fr. Bethrand with dogged persistence and enthusiasm negotiated and acquired over ten plots of land for further and future developmental purpose for the parish. He was a peacemaker. He mediated in and resolved some nagging and prolonged misunderstandings among families and villages”.

After receiving kind words and gifts from the Anglican Church in the community, catholic organisations in the parish, individuals, and a solidarity club (Ofu Ama Solidarity Club) led by its leader, Nze Emmanuel etc.  Rev. Ujunwa stated that, “I am moved by the songs and all the pleasant things you have said. You have surprised me. I am overwhelmed by the love you showered on me. May God reward you all”.

In an interview on the significance of the day to him, this was Rev. Bertrand’s response:

Today is a great day for me, in the sense that the people here, whom I have stayed with for six years asked me to come over for them to appreciate me for the work I have done for them. I am very happy coming back to them, to thank them for their support, because they are not the one that called me to this ministry, it is God himself. I did what I was supposed to do, working for them here. But for them to recognise that father you did well, come let us tell you thank you, I appreciate them. I appreciate them for their efforts to make sure that everything went smoothly when I was here with them. They gave me their full support, they gave me full encouragement, they did all they could do to make sure that our mission here was successful. Today is significant and I am happy.  I am happy today.

On his major Achievement:

The major achievement is the spiritual rejuvenation. That is the greatest achievement I made here. I try to revive their spiritual life. When I came in, you couldn’t blame them because of the distance from the parish centre, which made it impossible for the parish priest when they were still a station to be really covering the community very well. But with my coming to live with them, the gospel got closer to them, and as God will have it, they responded to the gospel and you see some changes in their life style – they become more aware of their Christian responsibilities.

His message to the parishioners:

The occasion was graced by His Royal Highness and Ugoeze S.O. Nwaeke, knights and Ladies of the church, traditional title holders, among others.

Filed under: Lifestyle, World
Share Tweet Pin G Plus Email
previous article: “Oblivion,” Tetrahedrons, and Other Dark Symbols
next article: Thesaurus is not the Copy Guru