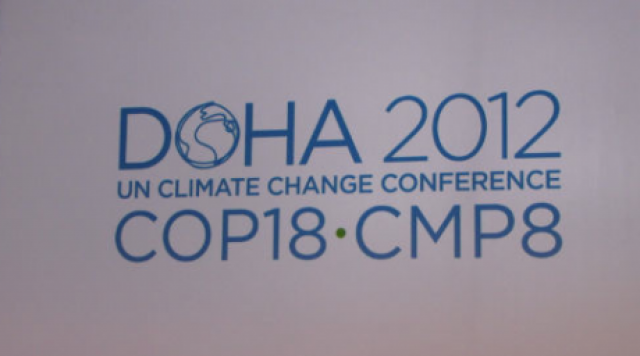 The United Nations annual climate change conference is ongoing in Doha, Qatar, hosting about 200 nations, seeking paths for a sustainable environmental future. The conference, known as COP18/CMP8, is driving at the target of last year’s COP17 meeting in South Africa, which is to have a deal to mitigate — cut and cap — emissions by all nations by 2015, and have it come to effect by 2020.
Global warming, we can say had a big year, first with a sustainable conference that hosted world leaders in Rio De Janeiro, Brazil, and series of extreme weather events that thoughts linked to it. Global warming is a known climate challenge and there have been ways and paths that have been identified to taper it. Some of the solutions are complicated given our dependence on fossil fuels and relatively fetus and expensive alternatives.
Skepticism and clear links of the magnitude of weather events to it, contributes to the usual flutter associated with the subject. Citizens are pressuring leaders to act on pressing issues –- jobs, taxes, housing, security, mortgages, debts -– in this recovery times, while climate change is somewhere behind.
Certain governments are taking decisions, and certain groups are doing campaigns for awareness and need for action. Some results are seen, and hope is knit with chance that the average temperature of the earth will not rise to an irreversible level in the coming years –- to cause disasters.
The attention has made climate change a celebrity, not needing introduction at many international and national gatherings; but it is a present-day global challenge –- on the sidelines. How will climate change move to the fore, given the risks it carries? How will efforts and understanding converge towards mitigation of greenhouse emissions? How will the world balance its economic needs and push for climate safety? Who knows if mitigation should be precedent, that, we will in future wish we prioritized? Who knows?
The complications of our dependence on fossil fuels and premature alternatives make progress and answers difficult — leaving climate change on the sidelines. The “more important” global economic recovery is still on the edge, albeit it’s the most important concern. If concerted mitigation is added now, the circa 2020 goal of full recovery may be altered and get contorted.
Maybe we leave our chances to hope; maybe geoengineering, maybe expectations that there will be surprise economic boom, maybe change in the earth climate cycle to bring cooling, maybe surprise cooperation for action by world’s biggest emitters, maybe a global mitigation deal in 2015 and its coming into effect in 2020 without any events or conditions that will damage it, maybe.
The worst should not come, as we are seeing encouraging steps from some places. California has taken the bold step with laws to drive mitigation, the United Kingdom, is upping aid to poor countries for renewable energy and its internal efforts too. The EU is looking at aviation pollution tax, which may become a global move. Australia is also proceeding in energy efficiency in new directions.

Climate change is a global challenge on the sidelines, it may remain so in the coming years, but from the sidelines, it is pulling weight that reminds everyone of how it is can damage a completed recovery in a jiffy.

Filed under: Health & Science, Media & Tech
Share Tweet Pin G Plus Email
previous article: 5 Ways to Help the Animals of Hurricane Sandy
next article: Life Would Be Difficult Without Mercy