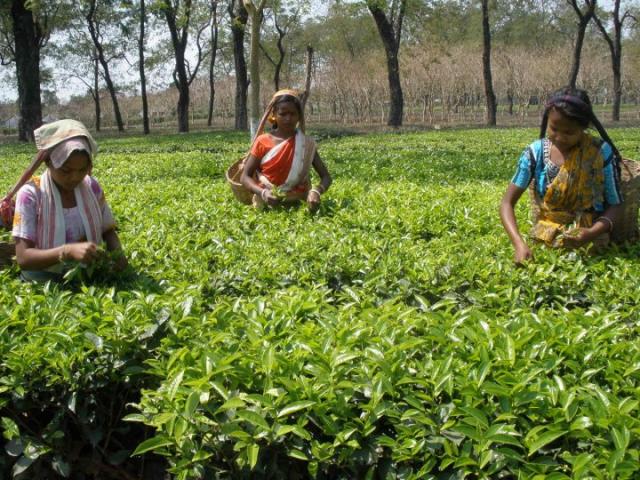 Production of tea in Assam – one of the world’s largest tea producing regions – is on a slow decline, thanks to changing climate in the Brahmaputra river basin. This has been revealed by Prof Chandan Mahanta, a leading scientist from Assam who has been studying climate change effect in the river basin for years.
Speaking at a recent media meet on climate change and effects of other development projects on the Yarlung Zangbo/Brahmaputra river basin in Kathmandu, Nepal,  Mahanta said, interaction between researchers of Indian Institute of Technology, Guwahati and the tea growers have hinted that productivity has been slowly declining across the tea gardens of Assam for the past decade.
Mahanta’s statement is validated by the Economic Survey of Assam 2009-10, which shows that the production of tea has indeed declined from 1685 kg per hectare in 2001 to below 1500 kg in 2010. This is surely a disturbing trend for the state which has been at the forefront of producing tea for past 170 years. There are nearly 5000 tea gardens in the state, with an estimated total annual production capacity of 100 million tons of tea leaf.
The decline on the yield has been attributed by many to erratic rainfall and inclement weather conditions. The ideal weather condition for a tea crop is rainfall at night and warm weather condition during the daytime. However, for past decade, incessant rainfall has deprived the crops of sufficient sunlight and a warm temperature during the day time in summer. Rain in the winter has also been a new phenomenon, bringing a damaging impact on the production.
According to Mahanta, the IIT is now collaborating with the leading tea growers of the state to collect data and information on climatic trends such as rainfall deficit, growing temperature and erratic rainfall patterns. The study, once completed, is expected to help create more understanding of climate change effects and propose solutions to the rising problems.
In recent times, reports have also brought forth another problem: a steady rise in the use of pesticide in the tea gardens which has caused a sharp decline in the export of the product in the international market.
In 2010, there were reports of a sudden outbreak of blisters on tea plants. Large estates in eastern Assam were the hardest hit by the pest attack which resulted into crop failures. The reason for the pest attack has since been attributed to the growing temperature, which makes the tea trees more vulnerable to pests. However, several countries, especially the European Union, have a strict legislation on pesticides. Therefore, increased use of pesticide in Assam’s tea also risks rejection by international buyers, thus causing huge financial losses. India – the second largest tea exporter in the world – exports an average of 200 million kg annually. But in 2010, its tea export revenue fell to Rs 1,899.69 crore from an earlier Rs 1,903.77 crore.
The industry of Assam is also a big employer with approximate 600,000 people –mostly men and women from the marginalized communities – working as leaf pickers, gardeners and factory workers.
With the declining production and a slump at the export market, the livelihood of these tea workers might alsoget threatened.
Filed under: Business, World
Share Tweet Pin G Plus Email
previous article: RIL’s Latest Advent: 4G Revolution and Low Cost Tablets
next article: Employability enhancement receiving fillip: Omar