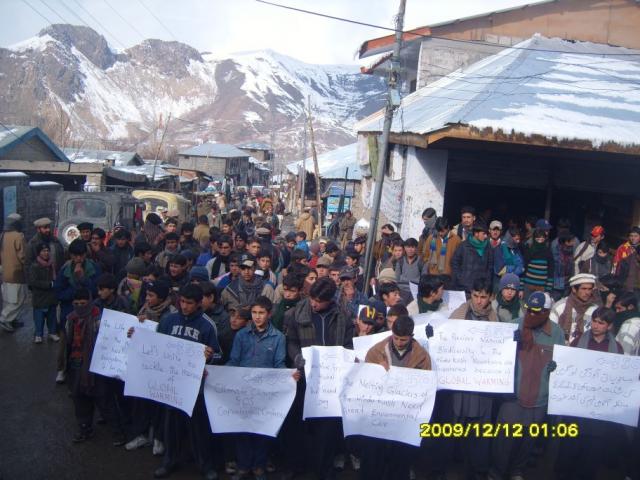 A vigil rally in Booni, northern was organized through the facilitation of CAMAT [Chitral Association for Mountain Area Tourism]. The objectives of the placard bearing rally was to showcase solidarity and show support to the climate change SOS Copenhagen and to highlight the issues of climate change in the Hindu Kush mountains that has already posed a serious challenge to the communities living here.

The participants were mostly students of Government High School Booni and apart from business community, political leadership, social workers and people from different walk of life. The rally walked for a kilometer before concentrating at the main Booni square where teachers, political leadership and business community representatives addressed them. It was maintained that for the last three decades there has been a considerable degradation to the natural environment is inevitably linked to global warming. The destruction of the village Sonoghor and Brep three years ago resulting from glacier bursting and the devastation of village Washeej from the snow avalanches are the eye opener in this regard.

The melting glaciers high up in the region—which are vital source of cultivation in the entire northern for centuries—are melting very rapidly. If these natural water reservoirs get lost, then the people here do not have any other option except to migrate to other places the way some of the valuable bird species have already done.

Likewise climate change has also severely threatened the habitat of the valuable natural biodiversity including some of the rare bird species like the black throated thrush, finches, magpie, grey tit and golden eagle that almost disappeared as their ecological needs were no longer fulfilled in the given ecological system. The population of wolf and fox has drastically shrunk and they are about to disappear. The degradation of the substantial vegetative covering has caused migration to markhor and wild goat that has disturbed the food chain for the elusive snow leopard forcing him to migrate to some other habitats. Now one can have very rare glimpses of the snow leopard in northern . It must have migrated to some other places better suiting his ecological needs.

The speakers at the rally emphasized that students, being young and energetic agents of positive social change and silent revolution, have to be focused whilst addressing the issues of natural environment. Moreover, they recorded their apprehension with regard to the damages to the natural climate as a matter of real concerns for the mountainous communities as it is affects their social, political, communal and economic needs and create a range of health related issues. If land resources are eroded and natural biodiversity degraded, then it will surely threatened our own very existence. It is, therefore, for the protection of natural environment and forming combined front against global warming must be the priority no one for the mountainous communities.

At the end of the rally, the following resolution was unanimously passed with an aim to protect the healthy natural environment of the region:


• That today on , a vigil climate rally supporting the conference in firmly pledges to continue efforts for the protection of natural environment by supporting the cause worldwide. To this end, the strength of school, places of worships and other social centre will be harnessed, awareness will be raised and a workable plan will be prepared at grassroots.

• That developed and industrial nations are appealed to curtail the emission of carbon into the atmosphere so that the prospect of global warming would automatically be reduced and its negative impacts on the remote and less developed mountainous regions would be minimized.

• That there must be authentic research initiatives on the part of developed nations to measure the continuing damages to the natural environment of the mountainous communities in northern . Based on such researches, awareness campaign will be mounted in the target communities and improved and coordinated strategy aimed at tackling the menace of global warming would be undertaken.

• That courses on environment must necessarily be included in the curriculum of schools, both in the government and private sectors so that they will have proper knowledge and be equipped in handling the problems of natural environment based on their indigenous knowledge.

• That to fight against climate change; it is of paramount importance to put a halt to deforestation in the southern Chitral and to increase forest everywhere else in the district. Only with much greenery can we assure the health of our natural environment. To reduce pressure on the existing forest belt, the rally maintained, provision of an alternative source of fuel to the energy starved Hindu Kush region either in respect of natural gas from Central Asia or by generating electricity from its numerous rivers and streams could be helpful.