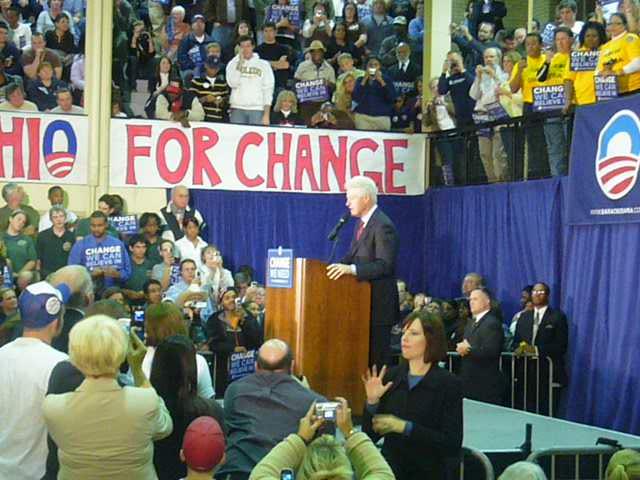 Youngstown/Toledo: Terming the Bush and McCain radical right-wing extremists, former US President Bill Clinton has said that the changing world needs a US president who can bring an end to hostilities, put the country and world’s economy back on track and thus improve the America’s image abroad by adopting a policy of hostility as the last resort not the first.

In an impassionate speech punctuated with anecdotes from his 1992-2000 eras, Bill Clinton made a logical case for Obama at the same venue in where in last February he was thrashing him during the primaries and which has created a wedge between the party’s white middle class and Obama in this suburban area. Although Obama has arguably out-polled them during the over-all primaries, the are two of the most popular Democratic politicians in the nation and crowd-pullers as well.

Bill Clinton’s stop in was part of his first extended effort for any of his party candidates since leaving the office in 2000 and especially on behalf of Barack Obama. Following the bitter primaries, the relationship between the former president and the senator reportedly remained testy. But after the two met recently in Clinton’s New York City office and posed for a photograph together, Democrats have decided to use Clintons charm and influence in the key states including Ohio and Florida, hoping they can bring around voters who backed Hillary Clinton in the primaries and Bill Clinton in past presidential elections.

Hillary Clinton, a New York senator, has been more peace-making, at least in public and appeared earlier as well for Obama in various rallies in and around her home-base—New York. Bill Clinton did mention that in his speeches saying that Hillary had made so far 70 appearances while he could only do 30 for Obama during this campaign. bagged over 18 million votes in the primaries, and since she holds a considerable influence in the Democratically-controlled Senate, she is likely to gain equally incase of Obama’s win against McCain. There have been reports in the media that a tacit understanding has been reached among the Clintons and Obama to take Hillary Clinton in the future administration of Obama besides giving her the opportunity to run for the New York State Governor elections due in 2010.

Riding on the huge financing ($ 639 million so far as compared to $ 360 million by McCain camp) of the Obama Campaign, both will appear separately in various key states in the last 120 hours of the campaign. Hillary Clinton appeared in , and while Bill Clinton campaigned in and , and attended a rally with Obama in in the past 24 hours.

After appearing in and , –two depressed working-class cities where Hillary Clinton over-powered Obama during the state’s primary election–Bill Clinton will travel to which will be followed by stops in and and then on Sunday will fly to . Obama is trailing by almost ten percentage points behind McCain in ; ’s stops might help him narrow that gap.
Interestingly, Bill Clinton did not campaign heavily for Democratic nominees Al Gore, his own vice-president (2000), and John Kerry (2004) as he first he was busy with his wife in New York seeking her a Senate seat and in 2004 he had a major heart surgery which prevented him from taking any part in Kerry’s campaign when it was do and die situation towards the end of Kerry-Bush race.

Bill Clinton addressing a public rally in the suburbs of , which according to many polls is led by Obama by five percentage points, told a cheering crowed of mixed nationalities that the next elections are all about ideas, philosophy and strategy and not about personality or experience. He said that of all the candidates Obama is tge best decider-in-chief and those questioning his abilities should look at their own track record. Recalling his days in the power, much to the cheers of the crowd, he said that when he left the office the country had a one trillion dollar budgetary deficit which now stands at ten trillion dollars and we have got over 70,000 (seventy thousand) battered, wounded American soldiers to take care of, a dive-nosed economy, rising joblessness and fleeing industry. He said that “certainly this would not the end of our problems here as there are parcels of problems around us and experience alone would not be enough to bring the country out of ditch.”

Filed under: Politics, US
Share Tweet Pin G Plus Email
previous article: US Elections: State has any responsibility towards them?
next article: Internet: How to get paid to blog?