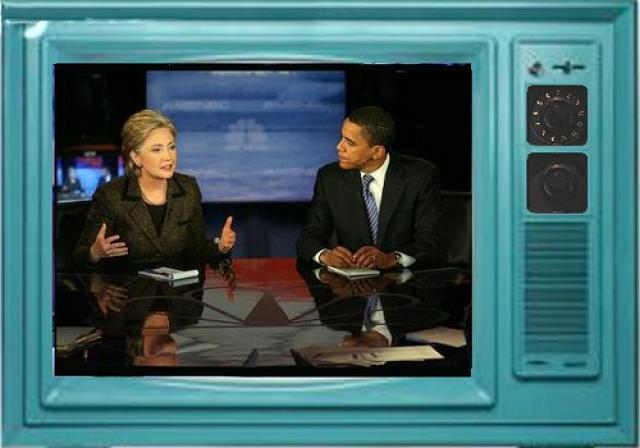 In Philadelphia, Pennsylvania, during the Democratic debate hosted on ABC News between frontrunners Senator Hillary Clinton of New York and Senator Barack Obama of Illinois, Clinton has given the emphasis that Obama can win the White House, come the general election.

“Yes, yes, yes,” Clinton answered when asked about Obama’s electability along with winning the White House. This comes six days before the Pennsylvania primary takes place on April 22.

When Obama was asked about Clinton’s electability, he answered by saying that he’s said so before. While the two of them said that the other could be elected into presidential office, there were other issues at hand.

The two of them were on the same book on taxes and Iran. Both Clinton and Obama said that they would not raise taxes on those that make less than $200,000 a year. They both added that they would use force against Iran if they ever obtain nuclear weapons and use them on Israel.

Clinton said that an attack of Israel would bring backlash from the United States.

Obama said that the United States would take the necessary action if that ever happens.

Also, Clinton decided to address the Bosnia issue. She made her first public-apology on the live debate.

“I may be a lot of things but I am not dumb,” Clinton said in regards to her trip to Bosnia in 1996.

In addition, Obama complemented Clinton’s Senate record. When asked about possible vice-president running mates, the two of them sidestepped with their own answers.

Obama said that it was too early to be talking about who the VP candidate would be due to still trying to find a Democratic nominee. Clinton said that she will do everything she possibly can to ensure that either she or Obama takes the presidential oath come January of 2009.

While they both said the other can win the White House, Clinton still stressed that she can do a better job than Obama in beating GOP nominee Senator John McCain of Arizona.

But first thing’s first, the matter at hand is who is going to win Pennsylvania. A recent poll by Washington Post/ABC News shows that Democratic voters are losing trust in Clinton. However, the polls will not decide who wins Pennsylvania.

The winner of Pennsylvania will be decided by the voters.

Interestingly enough, the night of the debate takes place on the one year anniversary of the Virginia Tech massacre in which Cho Seung-hui killed 32 students and professors. It did not seem that neither Clinton nor Obama talked much about the issue of guns. When talking about guns, it went back to Obama’s “bitter” speech.

Guns could possibly be the hot button topic in regards to the Democratic primary on April 22. There are almost one-million licensed hunters in the state of Pennsylvania. However, Philadelphia has a high number of gun related murders.

However, it could be overshadowed by “green jobs and technology” since April 22 is Earth Day.