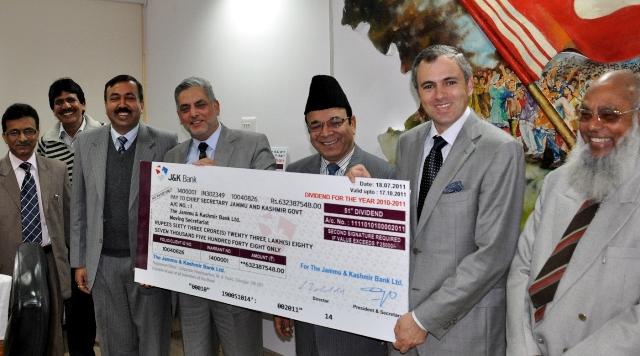 “While we appreciate your performance in extending hand for growth and development of the business in the State, we would like you to walk an extra mile in this direction and facilitate budding entrepreneurs and qualified youth to venture upon in industrial and other sectors for earning their livelihood”, he told the Bank urging for smooth and easy flow of credit from the Bank for prospective business and economic reorientation particularly in rural areas.

The Chief Minister was speaking at a meeting in which Chairman Jammu and Kashmir Bank, Mushtaq Ahmad presented two dividend cheques worth Rs. 67 crores to Omar Abdullah as a share of the State Government.

Describing Jammu and Kashmir Bank people’s own Bank, the Chief Minister said that people in the State for this reason have rightful expectations that the Bank would focus greater attention towards smooth credit flow to help generation of wide-ranging economic activities. “Your role in reorientation of rural economy is significant and we would like you to deliver on this count more positively and willingly”, he said.

Omar Abdullah emphasized the need for strengthening of Jammu and Kashmir Grameen Bank activities and asked for formulating packages for the agriculture and allied sectors to facilitate economic growth and development of these sectors in a balanced manner. “This will open new vistas of job opportunities for youth and give boost to trade and business in rural areas”, he said and told the Bank to come forward for lending to the self-help groups and budding entrepreneurs in these sectors. “To make Grameen Bank functioning more comprehensive and holistic you can also rope in consultancy and expertise available in this field”, he maintained.

The Chief Minister asked the Bank to fill up the vacancies regularly to avoid any vacuum in the availability of proper human resource which is imperative for up to the mark performance and functioning of the Bank.

The Chief Minister appreciated the Chairman for his outstanding leadership and praised the Bank for showing remarkable growth in its business during his tenure. He also welcomed the FE Best Bank Award bagged by the Jammu and Kashmir Bank for the year 2011.

Giving resume of the achievements of the Bank, Chairman said that as against last half year’s business of Rs. 60000 crore the Bank has achieved over Rs. 75000 crore business this half year registering an overall growth of about 25 percent. He said during the current financial year the Bank expects to mobilize business aggregating to Rs. 85000 crore while the target for the next year has been fixed at Rs. 100000 crores. Similarly, the profit of the Bank is likely to grow from current year’s Rs. 800 crore to Rs. 1000 crore in 2012-13 while it stood at Rs. 615 crore for the last year.

Mushtaq Ahmad said that Jammu and Kashmir Bank alone has provided over Rs.600 crores credit through its more than 400 rural branches in in the first quarter of the year 2011-12. “This is 70% of the total credit provided by the banking system”, he said adding that the Jammu and Kashmir Bank would further improve its performance in this sector. He said the Bank intends to open 100 new branches in far-flung and unbanked areas of the State which will give further boost to its activities.

The Chairman said that under the recruitment drive, the Bank is shortly appointing 1500 personnel while 100 to 200 appointments in the officers’ category would be made during the next year. The practice of filling up the vacancies will be made a regular feature he said.

Matters pertaining to the strengthening of Khidmat Centres and fast tracking credit flow under SKEWPY also came up for the discussion. It was stated in the meeting that the Bank has sanctioned 239 SKEWPY cases from June to September this year while 94 cases are in the pipeline.