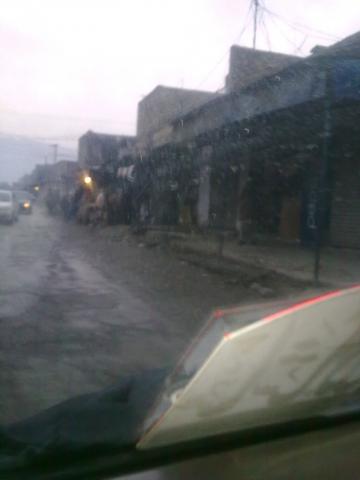 Hundreds of coal mine workers in Dara Adam Khel few months ago were visible on road side, their clothes, faces and bodies soaked in black carbon were making them unidentifiable, only wide eyes and white teeth were visible on their carbon soaked faces in case of occasional smiles, that scene has been changed now, roadside coal mines are still there in Dara Adam Khel, one can see the trucks standing near coal mines in plain areas but the workers are missing, a Malik from Akhurwal Dara Adam Khel says ‘On distribution of income of Dara Adam Khel coal mines share holders have developed differences now work in coal mines has been stopped. Hundreds of families in troubled tribal area of Dara Adam Khel are without income now, many children have died with diseases their parents can not afford to provide them medical treatment because, of poverty.

When I asked the Malik and share holder of Akhurwal coal mines that whether he will ever arrange proper kits, helmets and other security measures for coal mines workers to improve their working conditions the literate Malik has said yes I’ll do that and will search on the internet to buy all this stuff.

During past one month Dara Adam Khel tribal region which is situated between Peshawar and Kohat has witnessed one suicide bomb attack on a market in which twenty people have lost their lives, a source says two Pakistan Army vehicles were also attacked by miscreants in Sheni Kali area of Dara Adam Khel, after the said attack security forces have blocked the road passing through bazaar of Dara Adam Khel, the only newly built  road which links Southern districts with Northern districts of KPK is open for traffic and on check post before Kohat Tunnel sometimes long queues of vehicles can be witnessed now on it.

After the arrival of Governor KPK Barrister Syed Masud Kausar in power, law and order situation in Dara Adam Khel has been improved Kohat Friendship Tunnel which was under attack of militants and was often closed for traffic now is secure and has been repaired from inside, prompt security measures are taken to ensure secure passage from the said tunnel. A Malik says that security forces have intervened to settle dispute regarding income of share holders from coal mines and this issue will also get settled soon.