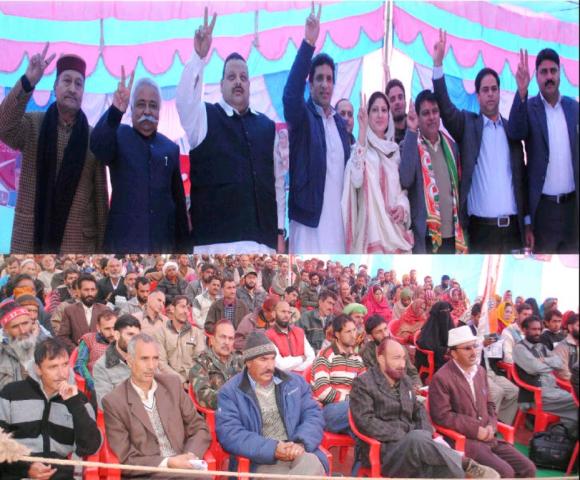 In his speech Aijaz Ahmed Khan, said that holding of panchayats elections after a period of over thirty years indicates the intention of coalition government to empower people at grass root and involve them in policy framing and implementation of schemes.

He said coalition government has transferred powers of fourteen departments to panchayats under a cabinet order. He said capacity building training camps and workshops were organized in the state to train panchayats and apprise them of their functions and duties at the grass root level. He said steps will be taken to make these panchayats more effective and vibrant.

Aijaz Khan urged the Panches and Sarpanches to overwhelmingly vote in favour of the NC-Congress candidates and make them victorious.

Addressing the Panches and Sarpanches Devender Singh Rana Political Advisor to the Chief Minister said that National Conference – Congress are tied in an ideological bond, a bond which is for the welfare of the people of the state of Jammu and Kashmir. He said NC-Congress coalition symbolizes equitable development of all regions and sub-regions of the state and both NC and Congress share the high principals of secularism, amity and solidarity of all regions of the state.

Rana appealed the panchayat members to ensure victory of NC-Congress candidates in the ensuing Legislative council elections and pave way for constitution of powerful, viable three tier panchyat system in the state which he said is the commitment of the coalition government and will be fulfilled.

He further said that success of the two candidates will be a befitting reply to all those who are trying to undermine the strength of the coalition government.

Vikar Rasool Wani, MLA Banihal, Ashok Kumar, MLA Ramban and Sajjad Shaheen District secretary J&K National Conference while addressing the Panches and Sarpanches urged them to vote in favour of the coalition candidates and ensure that both candidates get decisive majority.