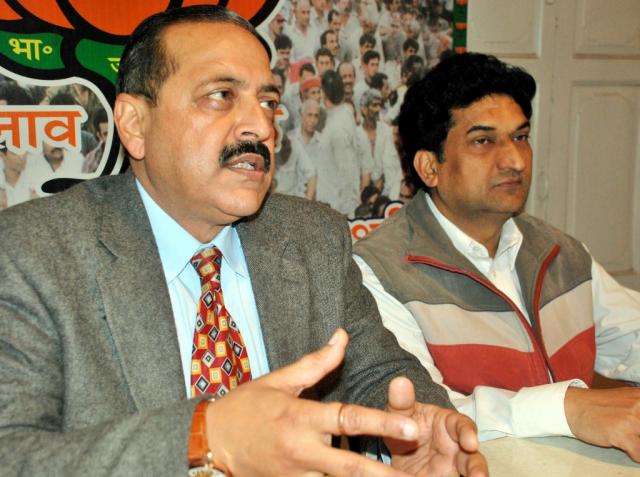 Jammu, February 21,(Scoop News) – With the ruling National Conference party leadership issuing highly provocative statements over the hanging of Afzal Guru and its ruling partner Congress party maintaining a convenient silence, it is more than evident that the NC-Congress coalition government in Jammu & Kashmir has become a security risk and that the two parties are following a dangerous divisive policy with the sole agenda of continuing in power through appeasement of Kashmir separatists.

This was stated here today by BJP State Chief Spokesperson & National Executive Member Dr. Jitendra Singh while addressing a press conference convened to release documents spelling out issues of concern and priorities for BJP. The documents had been prepared to mark the BJP “Karyakarta Sammelan” held in Jammu on February 17 and were meant to serve as resource material for party cadre across the state from district, mandal (block) to booth levels. Pertinent to mention that the Karyakarta Sammelan on Sunday was addressed among others by MP & National General Secretary J.P. Nadda and  National General Secretary (Org.) Ram Lal.

Besides the concern of security risk posed by coalition government, Dr. Jitendra Singh said the party was worried about mis-governance at all levels and rampant corruption in administration. On the one hand, the government has lost initiative because of its misplaced priorities, on the other hand state high-ups were making unaccounted wealth from unlawful sources.

Dr. Jitendra Singh disclosed that at the Karyakarta Sammelan, exclusive papers were read out to highlight the problems of refugees who had been denied citizenship rights and Pak occupied Jammu-Kashmir (PoJK) refugees who were yet to receive their promised compensation. Referring to the paper prepared on the plight of displaced Kashmiri Pandit families, Dr. Jitendra Singh said that even as these Hindu  families awaited a dignified return to valley, 208 out of 438 temples there had suffered damages in the hands of terrorists and anti-social elements. The party stands for early passage of the pending bill of temples and shrines, he added.

Dr. Jitendra Singh said the people of the state had been denied their democratic rights because of non implementation of  73rd and 74th amendments of constitution and delay in delimitation of election constituencies. He said while the youth of the state were victims of unemployment and exploitation, ministers and senior state functionaries were openly indulging in land encroachments.  The VDCs and SPOs, who played a major role in combating terrorism have been ignored while the government is keen to provide all kind of security to separatist leaders. He also referred to neglect of women, farmers and SC/ST. The party has taken up the demand of setting up of campus of and inclusion of Bhoti language in the 8th Schedule of the Constitution of India, he added.

While Jammu and Ladakh regions were at the receiving end of discrimination, Dr. Jitendra Singh said the common masses in the Kashmir valley were also suffering on account of crumbling health and education infrastructure, traffic chaos and frequent road accidents, slow pace of development and denial of basic amenities. He declared that party leadership announced at Karyakarta Sammelan to take up these issues more vigorously in the coming days, both inside the assembly and on roads.