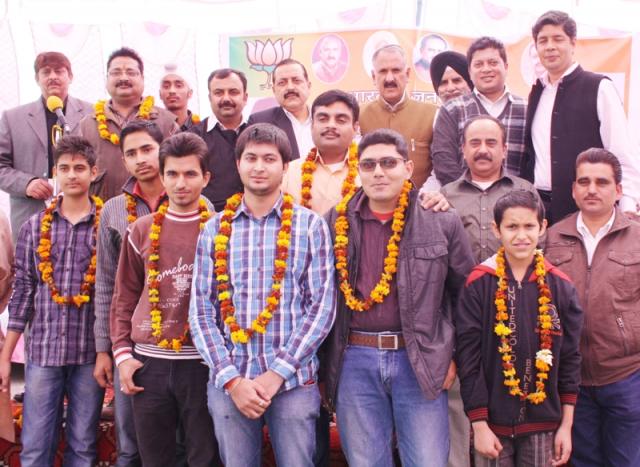 , March 12 (Scoop News) –There are lakhs of educated unemployed youth in the state and the number is going up with each passing year. This was stated by BJP state President Shamsher Singh Manhas while welcoming new entrants into the party fold in a function held at Trikuta Nagar.

Manhas said that there are more than six lakh educated unemployed youth in the state and in absence of employment avenues, thousands are adding to the list every year. He said that although high claims of government’s concern for the youth are made every now and then but on ground the situation is totally different. In fact, this coalition has nothing concrete for the educated unemployed youth of the state. He said the so-called new employment policy, which was launched with pomp and show, is also an eye wash. Whatever a youth employed under this polciy gets in a month is even less than what a labourer earns and it is indeed insult of the academic, technical and profesional education of the youth. He said that the state government should approach the centre and get sanctioned atleast one rail coach factory, which can adjust thousands of job. Likewise, there are so many other projects which can be brought into the state to end unemployment but lack of will on part of the state’s coalition creates hurdles in the process.

BJP National Executive Member & Chief Spokesperson Dr. Jitendra Singh said that mood in the country is in favour of generation chage in politics and therefore the youth will have a very important role in the years to come. He said that since BJP is fighting to uphold the value of nationalists in J&K, strong youth power in the party  is important to achieve the objective. He said that the BJP has always been raising the issues of the youth and demanding their timely adjustments and shall continue to work for the same in more effective way.

BJYM National Executive Member Aseem Gupta said that there has been a wave of change in the minds of youth as they have now realised that the present NC-Cobngress coalition has hollow slogans and false promises for the youth and more and more are joining BJP throughout the state.

Prominent social activist of the area Rajesh Gupta conducted the proceedings of the programme.