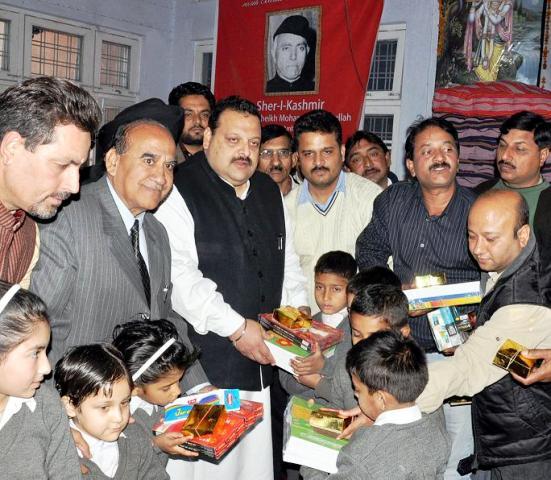 , December 06 (Scoop News) – The Political Advisor to Chief Minister, Devinder Singh Rana on Monday said that the Coalition Government is committed to maintain communal harmony and integrity of the state at all costs  and the forces adamant to create wedge among people will be fought back tooth and nail.

The Advisor was speaking at a function organized to celebrate the 105th Birth Anniversary of Shier-e-Kashmir Sheikh Mohammad Abdullah with the inmates of Bal Ashram, here at Ved Mndir Jammu.

The function was organized by the unit of National Conference and its Youth wing.

Cautioning the people of the state against the divisive forces, he sought public cooperation for neutralizing such forces to restore permanent peace and affecting uniform development of the three regions of the state.

Paying rich tributes to Shier-e-Kashmir Sheikh Mohammad Abdullah,  Rana said that by the dint of his visionary approach he enjoys a great repute at national and international level and laid strong foundations for a society based on mutual brotherhood and communal harmony. He said the present Coalition Government, led by dynamic chief Minister Omar Abdullah is also endeavouring to hold these cardinal ethos  high despite all odds.

Referring to the contribution of the departed leader in the development of Jammu and Kashmir, he said his highest concern was the welfare of the downtrodden for which he took some historical steps , including giving away of ownership of land to the tiller and extending the administration to the doorsteps of  people by introducing single line system.

Rana said that owing to his vision, he laid priority on   extending the  educational facilities  to      far off areas as he knew that without education the state cannot progress at  the  desired pace. "On finding no formal education in Kargil, he immediately took steps to introduce the same during his visit to this far off area" Rana said while highlighting the contribution of the Sheikh Mohammad Abdullah towards spreading of education among the masses of the state.

Appreciating the Ved Mandir Management Committee for taking good care of the inmates of   Bal Ashram, he said that it would be moment of great pride for the management, for state and the country when these children will carve out a dignified place in the society. He called upon the teachers and other caretakers at the Bal Ashram to inculcate moral values among the pupils   side by side academics so that they  grow as the messengers of peace, mutual brotherhood and  communal harmony.

Responding to the demands raised by the management, Rana announced Rs 2 Lakh out of his Constituency Development Fund for   purchasing a Generator for the Bal Ashram.

Later, the advisor distributed eatables among the inmate children and handed over mattresses and other study material to the management donated by the organizers to the Bal Ashram.

Provincial President   Jammu NC, Rattan Lal Gupta and Management Committee Bal Ashram A. Chand Gupta, and other office bearers of the NC party were present on the occasion.