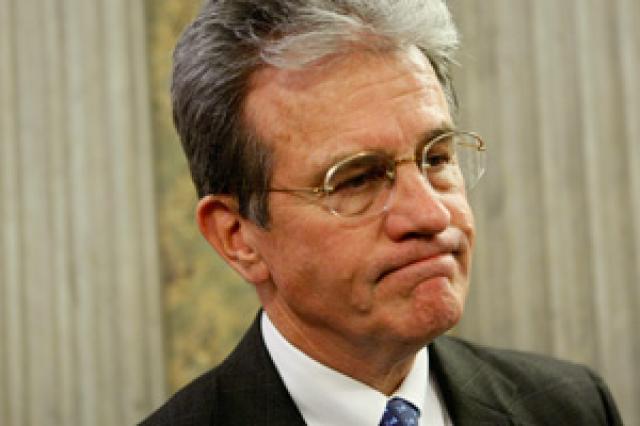 Sen. Tom Coburn, R-Okla., has sent a letter [1] (PDF) to Defense Secretary Robert Gates asking why contractors under criminal investigation were able to obtain millions of dollars in work from the federal stimulus program.

In a story [2] co-published Monday morning in USA Today, we reported [3] that six companies suspected of defrauding a small-business program have been awarded 112 stimulus projects, worth nearly $30 million, at Air Force and Army bases across the country.

The government investigation began more than a year ago, but the companies weren’t suspended from receiving new government contracts until Sept. 23, after they’d already begun working on the stimulus projects.

Coburn, who sits on the Senate Homeland Security and Governmental Affairs Committee, told Gates that he wanted to work with his office “to ensure that contractors in the midst of federal suspension and debarment proceedings are not rewarded with continued stimulus funding simply because their malfeasance was not discovered until the contract was under way.”

In an interview Monday, Coburn said the projects point to concerns he raised early on about the potential for fraud and abuse in the stimulus package.

“Where’s the notification so you don’t give additional contracts to folks who are under investigation?” he said. “If somebody fixed your garage door and they defrauded you—or, rather, you thought they defrauded you—would you give them more business? Nobody else in the country would do that.”

According to the Air Force suspension order, which was first reported by the Dayton Daily News [4], the six companies claimed to be small minority-owned businesses, but in reality they were all controlled by Craig Jackson, a Southern California businessman known for mentoring minority contractors.

Jackson had already benefited from the Small Business Administration’s minority contractor program, and his firm, Sanders Engineering, had grown too large to compete for government contracts set aside for “socially and economically disadvantaged individuals.” But the arrangement with the other businesses allowed him to continue to profit from the special contracts, the Air Force alleged.

Over the years, 19 companies controlled by Jackson—including the six that won stimulus contracts—“received more than $700 million in government contracts to which they may not have been legally entitled,” according to the suspension order.

In a formal response to the suspension filed Friday, Tony Franco, an attorney for Sanders Engineering, said the Air Force had misconstrued technical SBA rules. The SBA was well aware of the relationships and had even recommended that Sanders Engineering share its accounting expertise with other small businesses, he said.

Franco added that the criminal investigation was prompted by pressure from Congress and politically connected contractors to go after Alaska Native Corporations, which have special rules to help them win government contracts. One of the firms allegedly controlled by Jackson, APM LLC, is owned by the Cape Fox Corporation, whose shareholders are Tlingit natives living in a village near Ketchikan, Alaska.

Franco wrote that Sanders Engineering and other Jackson companies unknowingly walked “into a political firestorm, in which their successes would be used against them in an effort to make someone—no matter how unfairly—pay a steep price for the growing political unpopularity of the unique legal provisions governing ANCs.”