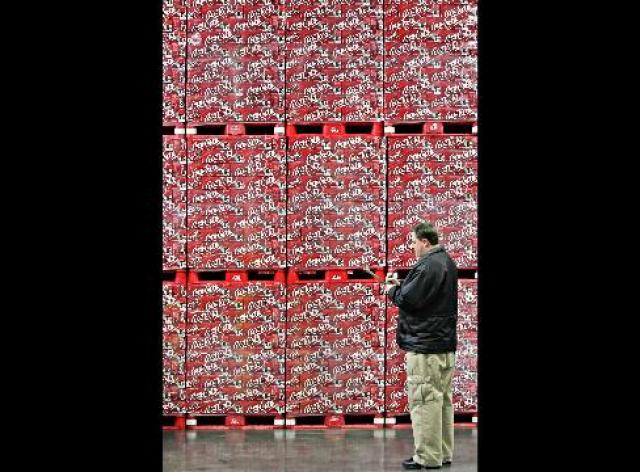 The shares jumped 3 percent in early trading after Coca-Cola reported earnings of 64 cents a share, excluding a writedown tied to its distribution business. That beat the 61-cent average of analysts’ estimates compiled by Bloomberg. The volume of drinks sold globally rose 4 percent, the Atlanta-based company said today in a statement.

Coca-Cola cut costs across all areas of business to counter falling demand for soft drinks in North America, its largest market. The stronger dollar reduced operating profit by 9 percent in the quarter. Chief Executive Officer Muhtar Kent reiterated his goal to save $500 million a year by the end of 2011.

“They’ve been very focused on taking costs out now that they have a strong product portfolio,” Erin Smith, an analyst with Argus Research in New York, said in an interview.

Net income dropped to $995 million, or 43 cents a share, from $1.21 billion, or 52 cents, a year earlier after Coca-Cola’s largest distributor wrote down the value of its North American business. Revenue fell to $7.13 billion. Analysts predicted sales of $7.58 billion, on average, according to data compiled by Bloomberg.

Coca-Cola, which owns 35 percent of the distributor, advanced $1.23 to $42.50 in trading before U.S. exchanges opened. The shares climbed or 1.5 percent, to $41.27 yesterday on the New York Stock Exchange. The stock declined 8.8 percent this year before today, compared with a 7.6 percent drop for PepsiCo Inc., the world’s No. 2 soda maker. PepsiCo reports results tomorrow.