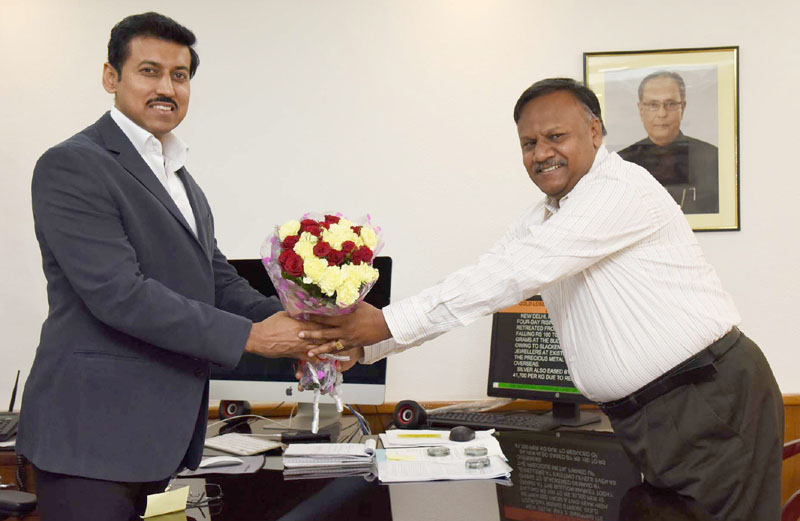 Col. Rathore Interacts With Netizens, Asks Them To Stay Connected With The Government

New Delhi (PIB-GR-TYP-BIN): Minister of State for Information & Broadcasting, Col. Rajyavardhan Rathore has participated in a live Facebook Q&A with the public on May 7, and replied to questions fielded by people from different parts of the country. Emphasizing the need to stay connected, the Minister requested the citizens to interact with the government on Mygov.in and NaMo App on a regular basis, to send questions and topics to Prime Minister’s Mann Ki Baat, and to stay connected with all Ministers on their respective social media pages.

Sharing with the citizens Government’s vision on development and communication, Col. Rathore reiterated that the present government under the visionary leadership of Narendra Modi strives to reach out to every individual through every means possible, to empower them with relevant information on Government policies and schemes, and to bring their feedback to the government to make schemes more effective.

During the one-hour interactive session which began at 9.30 in the night, Col. Rathore answered questions on various aspects of information and broadcasting, media ethics, crisis communication, public policy, Defence preparedness, border security, cyber threats, Olympics, skill development and employment generation. The Minister also received many suggestions and ideas from people on a wide variety of subjects during the live interaction.

At the end of the session, the Minister appeared Live on Facebook Video and thanked all the people who interacted with him. He also said that as it was an interesting and important means of reaching out and staying connected with the people, he would request other Ministers also to use social media platforms for similar real time interactions.

In his first Facebook Q&A, the Minister could answer 65 questions in English and Hindi out of a total of 1453 queries received during the hour-long session. Col. Rathore’s live video on Facebook received more than 12 thousand views and around 6 thousand likes within a short span of time.

The Q&A event was jointly organized by the social media team of Press Information Bureau, New Media Cell of Ministry of Information and Broadcasting, and Facebook. The entire Q&A event is accessible on the following link: https://www.facebook.com/Rathore/posts/1783832128506184

Filed under: Geopolitics, News
Share Tweet Pin G Plus Email
previous article: Parents Of Posthumous Gallantry Awardees Given Honour
next article: Is Anything Better Than Money?