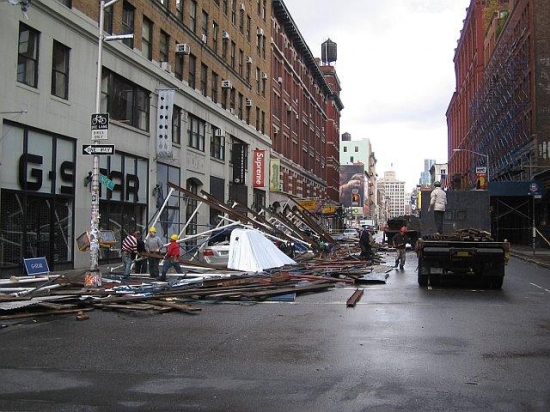 An enormous scaffolding collapsed on Lafayette Street on Saturday, just north of Prince Street. At least three vehicles were very severely damaged and the police cordoned off the area for hours while crews worked to clear the debris. The crash occured sometime between 5:00 am and noon on Saturday, probably as a result of the high winds and rain from the night before.

I spoke to a resident of the building who told me that the scaffolding has no functional purpose, but brings in $20,000 a month for the building’s landlord. She was infuriated by the situation and urged me to "spread the word."

Parts of the scaffolding had sliced halfway through a parked minivan. It appeared there were no injuries.

The controversy around illegal scaffolding advertisements has grown in recent months. In June, Curbed.com hosted a contest with the Municipal Art Society of New York that called for photos of the most egregious scaffolding ads. Later Manhattan Borough President Scott M. Stringer referred to the competition in a statement he made in August, condemning the trend and urging the Department of Buildings to crack down on offenders. Curbed.com even coined a phrase for the blight–‘advertecture’– and reported the incident on Lafayette Street earlier today.

According to the Municipal Art Society of New York, almost all oversized signs on buildings are illegal," though parts of Times Square, Seventh Avenue and Houston Street are "by and large excepted from the regulations." I am not familiar with the status of the Lafayette scaffolding.

Filed under: US
Share Tweet Pin G Plus Email
previous article: ‘History of Love’ a Soaring Success
next article: Welcome to GroundReport