This book was lately decommissioned from the “Central School District: Public Library, Towns of Hunter, Jewett and Lexington,” which says a lot about it – that it was cutting-edge in 1968, when it was published (that was in England, a year later in America), but seems a little dated now. Although this book is subtitled “A Suspense Novel,” it’s completely un-suspenseful. I would call it “brooding.” (Actually, I prefer books that don’t scare me.) It’s savvy, teasing, quite well-written; at some point it struck me that Pamela Frankau is the female Graham Greene. Though I’d never heard of her.

This question mark of a novel is also posthumous – which I didn’t realize until I’d finished it and read the introduction. Pamela was dying, and communicated her notes and theories to her cousin, Diana Raymond, who completed the book, so two voices united in this meditative book. Pamela is clearly a lesbian; in a sense the book is the testament of a gay woman.

Much of Colonel Blessington 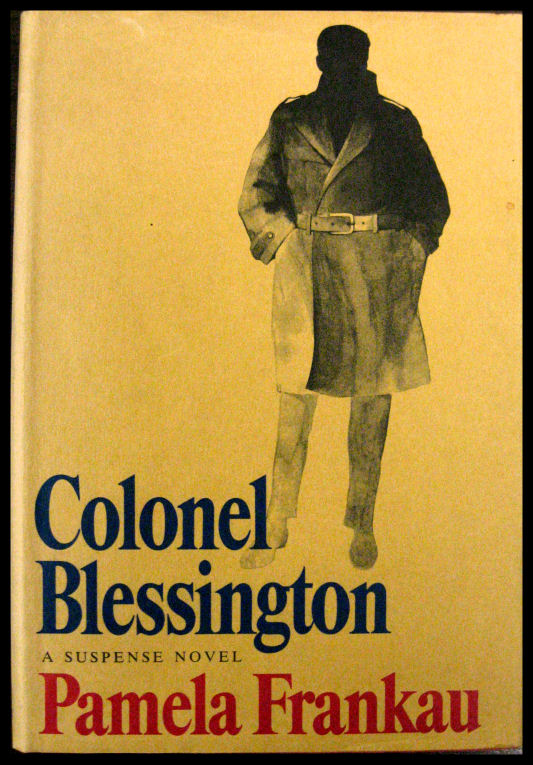 is a mildly biting satire of the Tory party. Here is the paragraph I opened to at random:

“Because –“ she said, pulling herself together. Beside her elbow the little green lamp began to wink in an agitated way and the chairwoman spoke smoothly to the clothes brush: “Well, it’s been a most absorbing discussion and I’m sorry that’s all we have time for. Thank you, Mrs. Fleur Seltz, Miss Beulah Maxwell and Miss Anita Gilroy.”

This scene is a radio interview one of the main characters (Miss Anita Gilroy) gives. The “clothes brush” is a joke about the shape of a microphone.