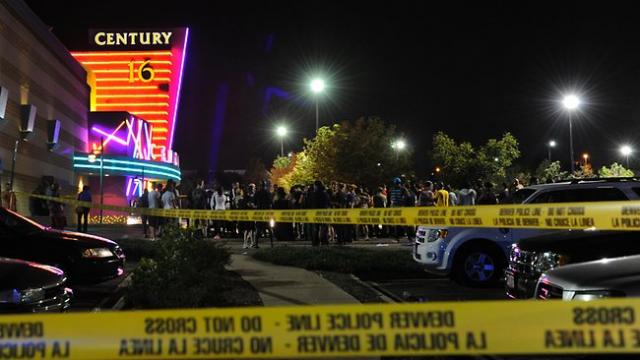 At least 12 people have been killed last night as a lone gunman opened fire at a midnight screening of"The Dark Knight rises". The shooting took place at the Century Aurora 16 theater in Aurora Colorado.The gunman stormed into theater 9 and opened fire. According to Police sources, the suspect was carrying at least four guns. An AK type rifle, two handguns and a shot gun. He started his attack by throwing tear gas into the crowd and then started shooting people, an eyewitness said.

He killed 12 people and wounded at least 38. The youngest victim of the shooting was only 3 months old and is now being treated in a special children’s hospital.

President Obama and Mitt Romney have both released statements to express their feelings. The President who is in Palm Beach, Florida on a campaign trip was notified of the shooting by his homeland security adviser John Brennan. Michelle an I are shocked and saddened by the horrific and tragic shooting in Colorado. Federal and local law enforcement are still responding, and my Administration will do everything that we can to support the people of Aurora in this extraordinary difficult time. We are committed to bringing whoever was responsible to justice, ensuring the safety of our people, and caring for those who have been wounded. As we do when confronted by moments of darkness and challenge, we must now come together as one American family . All of us must have the people of Aurora in our thoughts and prayers as they confront the loss of family, friends, and neighbors, and we must stand together with  them in the challenging hours and days to come," Obama said.

Mitt Romney, who spent the night in Boston also issued a statement. "Ann and I are deeply saddened by the news of these senseless violence that took lives of 15 people in Colorado and injured dozens more. We are praying for the families and loved ones of the victims during this time of deep shock and immense grief. We expect that the person responsible for this terrible crime will be quickly brought to justice," Romney said this morning.

The FBI is now searching the suspects apartment as well as a white car in the parking lot behind the theater. A Police official said they were looking for "booby traps".

Filed under: Politics, US
Share Tweet Pin G Plus Email
previous article: Centre grants Rs. 1248 cr to J&K for development
next article: Workforce Education In America: Then and Now