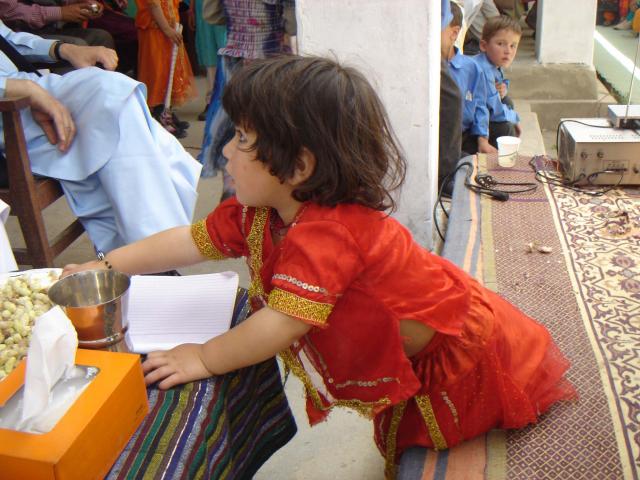 CHITRAL:  A largely attended colorful and impressive annual parents day program was held here at  lust green premises of Pamir  School and Degree College Garamchishma some 65 KM from here.  During the ceremony prizes and awards were also distributed among the position holder’s students and achievers of the last two academic years. This program could not celebrate last year due to security risk. Executive District Officer Primary and Secondary School Haji Siraj Muhammad was chief guest while the ceremony was presided over by former UC Nazim Shereen Khan Advocate. Principal of the institution Islamuddin highlighted achievements of the school and college as well as about future plan and their vision to provide quality education to both male and female students of the area. He said that during the past few years Pamir school has produced more than 50 professionals of high caliber. He said that the school has successfully intervened in Parabeg valley by establishing a primary school there to impart quality English medium education to the students of this neglected area having unique culture and language but unfortunately there was no degree college on government side in the valley. Its unique language and culture can fascinates anthropologists around the world. Some other projects completed during the period included a donor funded state of art Early Childhood Development (ECD) center and institute of education which will go a long way to improve quality of students and teachers. He said that Pamir was the most successful example of community based sustainable initiative that needs to be emulated for durable self-sustaining development.
Executive District Officer Education Siraj Muhammad Khan pledged to do his best to improve learning and teaching environment in schools especially government schools. He sought co-operation from every one in this noble tasks in his presidential address. He warned teachers of government schools to must perform their duty honestly and declared that there is zero tolerance for defaulter teachers. He also thanked management of Pamir School and College as well as Aga Khan Education Services and other private set up who play vital role in increasing literacy ratio in Chitral district. He also announced that Chitral will be presented as a model district in education. He lauded the efforts of Pamir school system for bringing quality education at the doorsteps of every one in the neglected areas of upper and lower Chitral.
Students of different categories read Hamd, Naat Sharif, National Songs, as well as they performed on different action like stage drama, tablue etc who enthralled the large number of audiences. At last prizes and awards were distributed among the achievers. The audience appreciated quality of the program items. The most attractive scene of the event was a Hamd consisting on a message of peace which was read with beating of Daf and ringing Gharba (rabab) which was liked very much.
Subadar Retired Atta Muhammad passes away.
Subadar retired Ata Muhammad passes away after short illness. He was hero of 1965 Pak India war. He was father of Fida Muhammad, Ayaz, Mahmood, Niaz Muhammad and uncle of senior journalist Gul Hamaad Farooqi. He was laid to rest at New Kakshal Peshawar.
G.H. Farooqi PO Box NO.50 GPO Chitral Pakistan or Bank Islami Main Branch Chitral.
Telephone No.(0092) 03025989602, 03337069572, 03469002167, 03159698446, 0943-302295, 0943-316052, 0943-414418, 0943-320737
Email: gulhamad@gmail.com
Filed under: Business, World
Share Tweet Pin G Plus Email
previous article: BOKO-HARRAM TABLES DEMANDS
next article: Event at Garamchishma