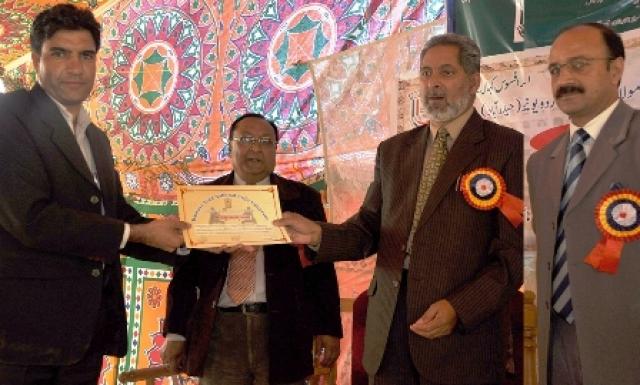 , October 5 (Scoop News) –    Minister for Higher Education, Labour and Employment, . Abdul Gani Malik today said that Urdu language is the official language of the State and at the same time, the language is popular among almost all the citizens of the country in view of its delicacy and sensitivity.

The Minister was addressing Annual Day function of of , , () here today.

He said that the state government has been doing a lot for the development of Urdu language at School, College and University level and much needs to be done for its popularity.

Appreciating the functioning of the college, . Malik said that Moulana Azad National Urdu University is doing yeoman’s service is not only propagating urdu language but also providing B.Ed and other Job oriented courses to the students of the state.

He hoped that this institution will succeed in its mission of popularizing Urdu in nook and corner of the state.

Speaking about the steps being taken by the government in prioritizing quality, the Minister said that the students shall have to face competitive tests and professional courses and the percentage obtained will not be given much importance.

The programme was anchored by Prof. Zahoor Geelani.

Earlier, Principal of the college Prof. Ashfaq Anjum in his address presented resume of the achievements of his college during last academic session.

He said  that 154 students are on rolls of the college and Rs.4400/= only is being charged as annual fee from the students for getting admission in B.Ed course, which is extremely low as compared to other colleges of the state. He said that shortly a satellite campus will be set up for the students.

He appealed the Minister to provide a bus for ferrying students from Barazulla to Lal Chowk especially girl students. He also demanded an independent building for housing the college which is presently functioning in a rented building.

Earlier, Prof. Bilal Rafiq shah in his welcome address said that this institution was founded in 2005 with hundred students as intake capacity. A National level Entrance test is conducted every year in which various students from various parts of the country make an attempt to prove their mettle, he added.

Prof. Bilal further said that the University imparts education in Urdu medium thereby playing its pivotal role in the growth and development of the language. He said the institution conducts seminars, debates and workshops and above all utilizes the services of the experts from the field who deliver extension lecturers benefitting us all.

The students of the college presented a scintillating cultural bonanza on the occasion, which was appreciated by the audience. A 6th standard student of government boys middle school Chari-i-Sharif Musrat-u-Nisa presented the “Shrukhe” of the Hazrat Sheikh Noor Din Wali (RA).