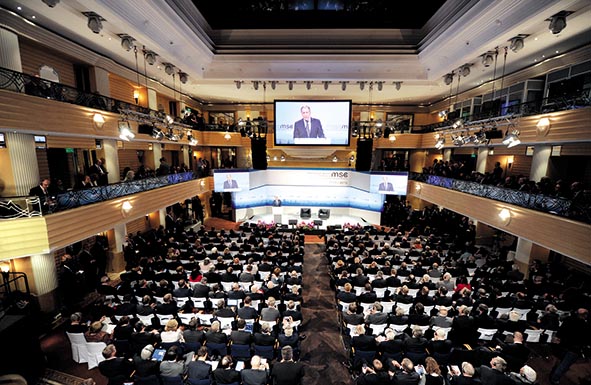 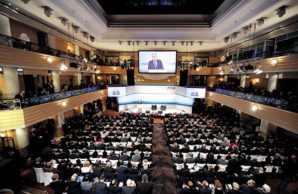 On the 16th and 17th of April Moscow will hold an international conference, dedicated to the issues of global security. It doesn’t really matter for Putin that a similar conference has also been arranged in Munich this year, besides it was much more meaningful and efficient. Russia is running this event with the only aim to catch up with Western democracies as Russian officials foster no hopes that any prominent political actors would participate in their conference. Such a demarche should be estimated exceptionally as a Putin’s attempt to polish his extremely negative image on the international scene, considering that the only idea about Russia conducting security conference seems very ridiculous (let’s not forget that Russia is sponsoring terrorism). This situation can be collated with an alcoholic struggling with alcoholism. By the way it is worth mentioning that, apart from China, no other powerful State will be represented at the conference. Meanwhile rest of Ministers of Defense bound to come, will act the part of bit players, for the conference wasn’t that dull and insipid.

As the aforementioned event is organized in the capacity of response to the Western States, therefore it would be logical to compare it with 51st Munich security conference. The most striking disparity lies in the fact that Munich was visited by representatives of more than 40 states, including France, Great Britain, Finland, the USA etc. Agenda of the Munich conference embraced topical global security issues, pertaining to which there was elaborated a range of feasible solutions. Alternatively in Moscow Ministers of Defense will approach general security issues such as “prospects of international military cooperation in combating terrorism and role of military-political instruments in maintaining regional and global stability”. Certainly, the best decision for the participants would be to unite their efforts in order to overcome the major aggressor of the XXI century which besides tends to run a security conference much as paradoxically it sounds.

Obviously, global security conference in Moscow will have a pathetic propagandistic nature. Pursuing his will to look as good as his “western colleagues” Putin seems to be ready to fall back on incredibly preposterous methods, unveiling a sort of “lagging complex” that compels him to take less and less logical measures in his fruitless attempt to polish his image on the international scene.

Naturally, the role of participants of Moscow global security conference will be confined to reading pre-arranged reports and making the conference more animated. Under such conditions there are no objective reasons for official representatives of the invited state to stay in the capital of Russia on the 16-17th of April.