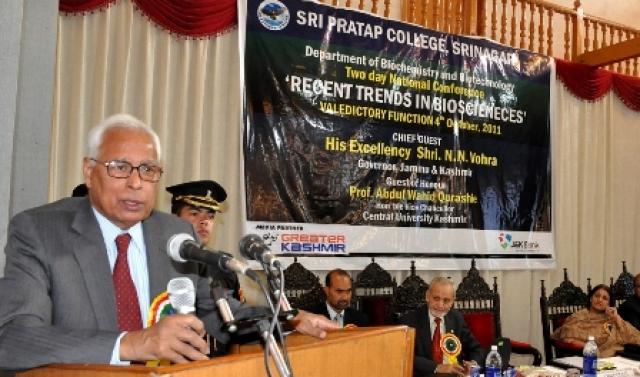 , October 4 (Scoop News) – N. N. Vohra, Governor, today called upon the Colleges, Universities and other institutions of higher learning in to take up collaborative research projects in identified fields which have a bearing on the development of agriculture and its allied sectors, all of which have an enormous potential for enabling the State to achieve self-sufficiency in agri-production.

The Governor, as Chief Guest, was addressing the Valedictory Session of the 2-day National Conference on “Recent Trends in Biosciences” at the , here this evening.

The Governor observed that, to begin with, a few research projects could be taken up for collaborative research, ensuring that they have the potential of promoting productive local applications. He added that there is a need for bringing about an agricultural revolution in the State and increasing agri-productivity by securing the maximum possible benefit from the latest agricultural technology and know-how.

Referring to the INSPIRE programme launched by the Government of India for attracting talented boys and girls to pursue science as a career, the Governor expressed the hope that a large number of bright students would benefit from the incentives provided under this programme. This would contribute, over the next few years, to making up the shortage of qualified science teachers in the State. He expressed the hope that a good number of talented students from the State would pursue their higher studies in science subjects as these provide very good openings and varied career options.

The Governor congratulated Prof. Zahoor Ahmad Chatt, Principal, for organizing this Conference on a most relevant theme and added that such interactions provide a profitable opportunity for sharing knowledge and latest research findings. Such Conferences, he observed, particularly benefit the young scientists and students as they get an opportunity to interact with the senior teachers and researchers from within and outside the State.

The Governor gave away Awards to six participants of the Conference for their best poster and paper presentations.

Prof. Abdul Wahid Qureshi, Vice Chancellor, Central University of Kashmir, in his Valedictory Address, said that though all areas of study are important but the study of science has acquired greater relevance in the present day scenario in view of the tremendous progress made in the realm of science and technology. He also dwelt on the numerous discoveries made in the arena of Biosciences and said that the theme of the Conference was most relevant.

s. Tanveer Jahan, Commissioner/Secretary, Higher Education, speaking on the occasion, hoped that more such Conferences would be organized by other Colleges of the State. She also emphasized the need for a larger number of students pursuing science studies to suffice the requirement of scientists in the coming years.

In his welcome address, Prof. Zahoor Ahmad Chatt dwelt on the aims and objects of the Conference. He spoke about the history and evolution of the College and its contribution in the promotion of higher education in the State over the past more than a century.

Prof. Syed Eazaz Hussain Rizvi, Organising Secretary of the Conference presented a Vote of Thanks.

Prominent among those present on the occasion were . M. A. Kakroo, Deputy Commissioner, Srinagar, Principals of various Colleges, faculty members of the College, participants of the Conference and the students.