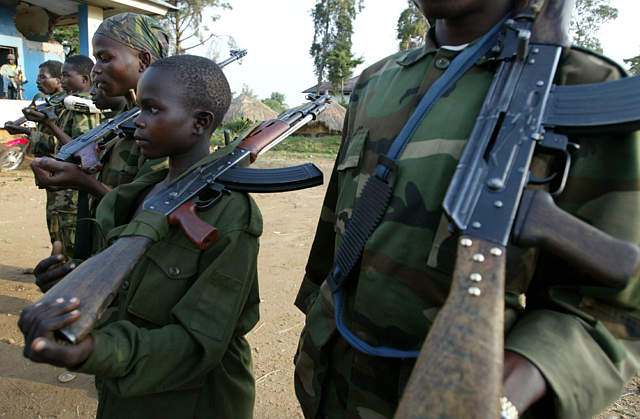 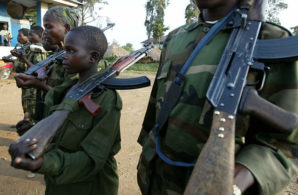 Child soldiers in the Democratic Republic of Congo. Sadly for these children they will know only war the rest of their lives.

On November 20, 2014 Senator Dick Durbin asked for and was granted permission to address the United States Senate regarding the warlord of the Democratic Republic of Congo and conflict minerals law update:

“Mr. President, it is not very often that Congress can make a policy change that has life-or-death consequences for millions of people, but in 2010 a law was enacted that is changing the money supply for warlords in the Democratic Republic of Congo.

Many may not realize that almost 5.5 million people have been killed during the long-running conflict in the Democratic Republic of Congo, which has been the most deadly since World War II. Tragically, women and children have suffered the most, as we too often see in conflicts. Millions have been displaced from their homes, and the prevalence of rape and sexual violence as a weapon of war is almost beyond belief. The U.N. reports that about 1,000 women are assaulted every day in Congo, which is roughly equivalent to 12 percent of all Congolese women.

One of the drivers and funders of this conflict is paradoxically that which fills the DRC with such potential–its natural resources. Instead of paying for the nation’s peace, education, roads and public health programs, the DRC’s mineral wealth has been siphoned off to fund the armed groups that vie for local and regional control of vast areas far from Congo’s capital, Kinshasa.

Tin, tantalum, tungsten, and gold are found in everyday electronics, jewelry, airplanes, and manufacturing equipment. But these minerals also have provided weapons and salaries to fighters, including conscripted child soldiers, who then visit unspeakable horrors on innocent civilians in return.

Over 4 years ago, I joined former Senators Brownback and Feingold and Congressman Jim McDermott in drafting a simple transparency reporting requirement for U.S.-registered corporations that source these four minerals from the DRC or its neighbors. And in early June, after protracted legal challenges, the first of those annual reports was filed at the Securities and Exchange Commission.

The electronics industry, in general, has been out front on this push for great transparency, but sadly, the jewelry industry has lagged far behind on its due diligence and reporting. Some companies have made more than a good-faith effort to determine the origins of the minerals they and their suppliers use, and a few of those companies, I am proud to say, call Illinois home.

One of the leaders, across all industries, on this is Motorola Solutions, headquartered in Schaumbergn, IL. Motorola Solutions emerged early as a company dedicated to cleaning up its supply chain, and to do so, it helped establish Solutions for Hope, dedicated to developing a closed-pipe supply chain. Kester, a subsidiary of Illinois Tool Works, makes electronic and automobile components and has been a leader in transparency of the smelters it uses. John Deere, headquartered in Moline, IL, painstakingly described its due diligence processes and even detailed the sources of minerals that its suppliers used. Others, like AAR Corporation, based out of Wood Dale, and Dover Corporation, headquartered in Downers Grove, developed conflict-mineral specific compliancy programs and provided detailed information on steps to identify risks in their supply chains. Lake Forest’s IDEX Corporation underwent efforts to create a sourcing policy that in its first year of filing covered 90 percent of suppliers.

I am sorry to say not all companies took this reporting requirement seriously, hiding behind the 2-year grace period that allows them to avoid questions. My hope is that these Illinois companies serve as an example for next year’s filings nationwide. And here is why–this rule is yielding real, tangible, positive results already.

The Government Accountability Office issued a report in late June that confirmed the opposite of claims made by those seeking to dismantle this reporting requirement. This rule has expanded the options for clean minerals sourcing in Central Africa. In fact, the number of certified conflict-free smelters has more than tripled in the past year alone. Intel has created its first conflict-free computer chip, while using responsibly sourced minerals from Congo and took its reporting a step further by voluntarily submitting it to third-party audits. Under the Conflict-Free Smelter Program, the number of international smelters operating free from conflict minerals continues to grow. Almost 90 smelters (40 percent of the world’s total smelters) are certified as conflict-free and more than 150 companies and industry associations participate in the program.

After being refined the origins of the material become difficult to track. Smelters purchase materials from a variety of sources, so the smelter or refiner is a critical point in the supply chain, where we can look for assurances about whether the material has been purchased from conflict-free sources. Apple has confirmed that its entire tantalum supply chain is conflict free. Dutch smart phone manufacturer Fairphone is making its products with conflict-free raw materials. Fairphone has already sold 35,000 units and is hoping to expand production as more consumers embrace conflict-free electronics. Fairphone and others are leading by example and proving that conflict-free is not only possible but that it can be profitable too.

The Enough Project recently reported on the effect of this legislation, and it is good news. Armed groups and the Congolese army are no longer present at 2/3 of tin, tantalum, and tungsten mines surveyed in eastern Congo. It also appears that responsible sourcing initiatives might be contagious–Congo-Brazzaville, the DRC’s neighbor to the west, has begun its own program to determine clean sources of minerals as well. I am also happy to say that our counterparts in the European Union are reviewing a bill based on our law to require European companies to provide similar transparency in their own supply chains. China has instituted similar rules, and other nations are following close behind.

The Congress has emerged as a world leader on conflict-minerals reporting, and the early results suggest that the people of the DRC should not have to suffer unspeakable violence that can be traced back to our cell phones, wedding rings, and cars. The filings are far from perfect, but we have begun the process. I appreciate those industry players that are leading the way. I can only hope that by cutting off this rich source of funding for the fighting in the Congo, we can help spare its citizens from the senseless violence that is tearing the country apart.”

Filed under: News, Violence
Share Tweet Pin G Plus Email
previous article: “Hundreds of Ukrainian soldiers have died in battle against these same separatist forces”, says Senator Portman
next article: A bill to improve the health of children and help better understand and enhance awareness about unexpected sudden death in early life