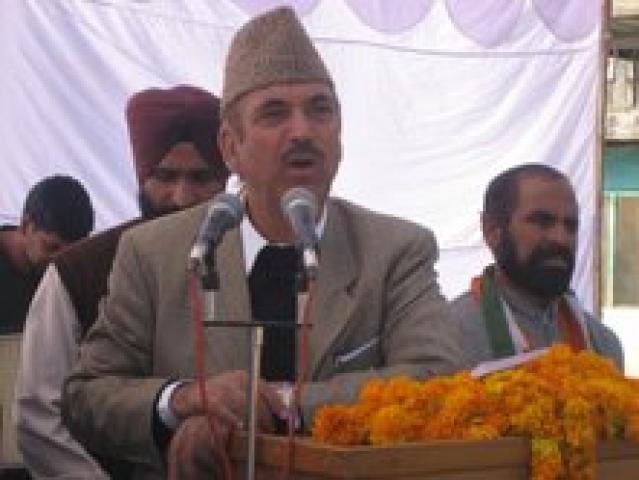 ,December 24 – Congress is going to form the next government in the state and if need be, the help of some small parties and independents would be sufficient. But he did not elaborate if Congress would form the coalition with any regional party like NC or PDP, former Chief Minister,J&K,Ghulam Nabi Azad told reporters in reply to a question

Azad and his Wife Shamima Azad soon after coming out of the polling station number 70 at SPM,Rajput,High School in Shaheedi Chowk in while speaking to reporters on Thuresday. He and his wife were the first persons to cast their votes in the morning here today.

He said, "The conducting of ongoing peaceful election is attributed to the biggest achievement of the Congress led government in the state, which speaks volumes of the effective governance.”

While replying to the questions put across by reporters about the reason for heavy polling across the state particularly in the valley Azad said that the reason for this is the total faith and belief of people in the democracy and outright rejection of the hollow slogans of some leaders. The vote is for the growth, development and maintenance of peace and harmony in state.The Congress led government had created an atmosphere in past three years in which the militancy was brought down with heavy hands and human rights violations were almost zero.This has created an atmosphere wherein the citizens felt safe to come out openly and cast their votes.

He further said that comparing to the four phased 2002 Assembly elections when about 48 small or big political leaders representing various political parties were assassinated, in the VII phased 2008 election  not a single representative of any political party has been hit by the militants .He said that the credit for creating such atmosphere goes to Congress led government.

He said that the defiance of the separatists’ dictate by the large number of voters to cast their votes in the valley despite the election boycott call given by the separatists indicates the faith of the Kashmirites in the vibrant and matured democracy of the country  and their urge for infrastructural development and day to day needs of a common man instead of their infatuation with so called Azadi.He said that the last assertion by the separatists to force the voters not to vote in the 7th and last phase of the election in the valley by calling for a strike and a ‘civil curfew’ is only their frustration. This also shows that the people have seen through the malafide intentions of the  unscrupulous self styled leaders and have now started unbelieving their hollow slogans .