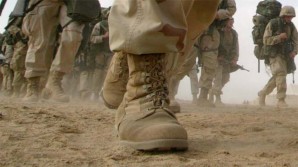 “Last month we heard that the White House planned to double the number of troops in Iraq, bringing the total to 3,000, despite the President’s own promise not to put U.S. troops on the ground”, said McDermott.

On November 3, 2014 Rep. McDermott asked for and was granted permission to address the United States Senate regarding the US military campaign in Iraq:

“Like Mr. McGovern, I am alarmed by the recent developments in what is becoming, in my mind, a full-fledged military campaign in Iraq. The situation in Iraq may be difficult, but that excuse does not merit the President’s overreliance on war powers and the two outdated authorizations for use of force. When it comes to war and peace, the authority remains firmly with this body, the United States Congress.

Last month we heard that the White House planned to double the number of troops in Iraq, bringing the total to 3,000, despite the President’s own promise not to put U.S. troops on the ground. On Monday another 250 paratroopers were called up from the 82nd Airborne for service in Iraq, and Congress is poised to give the President his $5.6 billion request to combat ISIS with virtually no debate scheduled on this House floor.

Mr. Speaker, I rise to implore the President to come to Congress and explain his strategy for this new campaign in Iraq. Even the last President, who was far less sensible, sought congressional authority. It is in President Obama’s best interest to address not just those relevant committees apt to grant him the legal leeway the White House weakly asserts but all 435 Members who have congressional authority and constitutional authority to send our Nation’s sons and daughters to war.

The President must tread carefully going forward, and not just because our recent military history in Iraq is poor but also because he now faces a Republican Congress. Those recklessly clamoring for greater military involvement against ISIS would like nothing more than to blame what could easily become a wider conflict, likely doomed to fail, squarely on the President’s head. I trust this President, and I have faith that he will make the decisions in the best interest of the American people, as he understands them.

Let me be clear: it is in the American people’s best interest for the President to ask the people’s representatives–us in the House of Representatives–for a proper authorization for the use of military force. Then John Boehner should lead the debate on such an authorization–a debate at great length and with complete transparency, not behind closed doors, not in committees, not somewhere in conference reports, but out here on the floor in front of the American people.

Mr. Speaker, we have wandered down this road in Iraq before with a far less thoughtful President. What our goal was in Iraq is long since lost. Whatever President Bush said it was, it never turned out to be what we were there about. And here we are doing the same thing again, unfortunately. It is time we learned from our mistakes and that we, as Members of Congress, take responsibility for sending our people over there to die. There will be deaths, make no mistake about it.

Generals have already said if we go over there a little bit, we are going to be there for the next 2 years. It is time for us to vote on this issue after a lengthy debate.”

See video: Sending US troops to fight ISIS is ‘recipe for disaster’ https://www.youtube.com/watch?v=YuRqvx4PRik

Filed under: Military, News
Share Tweet Pin G Plus Email
previous article: Congress ignoring its constitutional repsonsibilities to vote for war against ISIS
next article: The Truth of Genesis: The Sad Truth of Christianity and Judaism – The Mid-Middle.