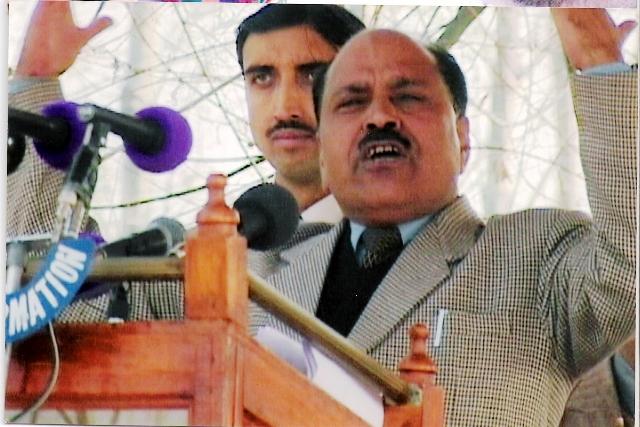 Jammu, January 21 (Scoop News) – “Unfurling of Country’s flag on the occasion of Republic Day is a national ceremony and Jammu and Kashmir like other parts of the country participates in the ceremony with enthusiasm and fervor”,the senior Congress leader and former Minister, Abdul Gani Vakil said adding that national flag on this day and other days of national importance is being hoisted at all tehsil, block, district and provincial headquarters besides government and other installations.

Addressing a large attended workers convention at Suchetgarh (RS Pura) from here at Indo-Pak border, Abdul Gani Vakil while criticizing the traditional characteristics of BJP to vitiate situations to fish in troubled waters and propagate their politics cult, rejected the tendency of creating controversies on the issue of national flag hoisting.

“The political parties, ministers, government functionaries and general people equally participate in the flag hoisting ceremonies in the State in every area”. He questioned the need of flag hoisting in by BJP when the national flag will be hoisted in the city at scores of places including the Bakshi Stadium and Lal Chowk.

“Making an issue out of a national event is nothing but politicking”, he said and ridiculed BJP for circulating negative message and trying to mislead people in the country and the outside ‘as if no flag hoisting of national flag takes place in Kashmir’ and

thereby, they contribute in internationalizing Kashmir issue “This is most unfortunate on the part of BJP to provide occasion to the enemies of peace and the country to get mileage out of their childish behavior”, he asserted.

He said that government worked hard for last six months to restore peace and create atmosphere of addressing all issues pertaining to in a political temperament. “All nationalist forces and parties should contribute positively to help

resolve issues and create permanent peace in the State along with strengthening its bonds with the country”, he said adding that instead of extending its hand, BJP is hell-bent to disturb the peace and create volatile atmosphere for the anti-national forces to get a field day.

Vakil said BJP’s such acts sprinkle fuel to the fire and provide occasions to the separatists and other similar forces to make hey while the sun shines. “Creating an issue out of flag hoisting is nothing but disrespecting the national flag itself. There was no issue at all on the hoisting of tricolor in the State anywhere. It is BJP who creates reactions and counter reactions for party politics”, Vakil added and said that the divisive politics and communal trait has been the hallmark of the BJP right from its inception.

Vakil said people of are wise enough to read between the lines and understand the designs of BJP behind making issue out of the national phenomenon. “No one even separatist forces question the right of flag hoisting and this practice is a continued one in Srinagar and other party of the Valley since the time of independence”, he said adding that flag hoisting would be conducted everywhere in the State and advised BJP to shun the practice of dividing society for vested interests and vote bank politics.

Besides others who addressed the gathering include Sr. Congress Leader and MOS Power Shabir Ahmad Khan, Ex. Minister Chowdhary Gharu Ram and MLC Haji Ali Mohammad Bhat and many others.