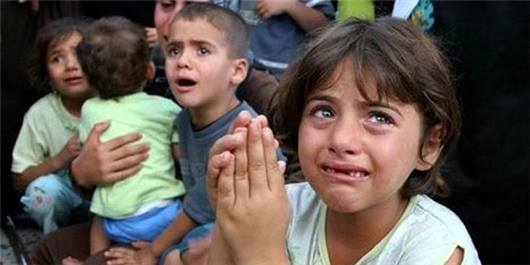 War is having a devastating emotional toll on the children in Gaza! Pictured here a Palestinian girl cries as bombs explode around here. She was among dozens of human shields being used by Hamas as cover so they could  launch rockets attacks at Israel in Gaza during the conflict between Israel and the terrorist group Hamas and Islamic Jihad in August 2014. It is unknown if she or the other children survived in this case.

I received the following letter recently from Congressman Ed Pastor of Arizona regarding the escalating violence between Israel and the terrorists in the Gaza Strip.

Thank you for contacting me concerning the recent escalation of violence in Israel and the Gaza Strip. I appreciate hearing from you on this important issue.

As you know, in early July, a series of tragic events transformed periodic attacks between Palestinian militants in the Gaza Strip and Israel’s military into a larger conflict between Israel and the Gaza-based group Hamas, a US-designated terrorist group.  This deadly conflict involved rocket fire, air- and sea-based strikes, and clashes between ground troops, and it is my understanding that both sides sustained casualties of militants and civilians alike.  Following fifty  days of fighting, and U.S. and international calls and efforts to end the violence, a tentative ceasefire began on August 26, though negotiations are ongoing.

The distrust and hostility that characterizes the Israeli-Palestinian relationship has produced immeasurable harm and tragedy for people on both sides of the issue. It is vitally important that peace be established between the Israelis and Palestinians, as their long-standing conflict involves complex issues that defy easy categorization of aggressor and victim. Violence and unjust treatment can be attributed to both parties in this conflict, and I believe that situations arising from the conflict must be judged and dealt with on a case by case basis without political bias.

The United States has been actively involved in encouraging, arranging, and facilitating past peace talks and negotiations between Israeli and Palestinian leaders here in the U.S., which I believe has been the most appropriate form of involvement. Please know that I will continue to monitor this  recent rise in hostility and the ongoing negotiations, and I will keep your comments in mind as I review all foreign aid, especially funding for Israel and the Palestinian Authority, as Congress works towards finalizing the Fiscal Year 2015 State and Foreign Operations budget.

It was good to hear from you on this important matter.

Filed under: News, World
Share Tweet Pin G Plus Email
previous article: Senator Jerry Moran of Kansas admits that its more likely “we are arming and training rebels (in Syria) that will ultimately use the weapons against our allies”
next article: Putin meets with members of Russia’s Security Council to discuss ISIS, including his top spy master Mikhail Fradkov