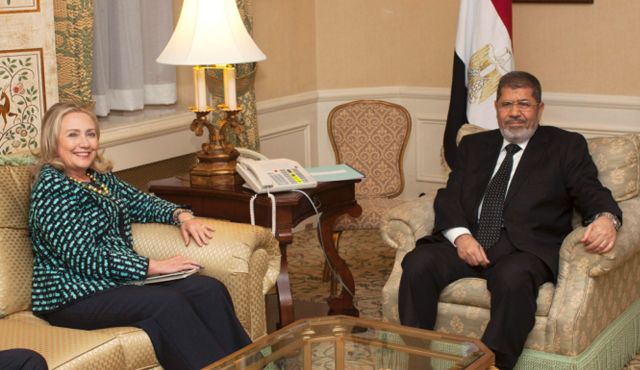 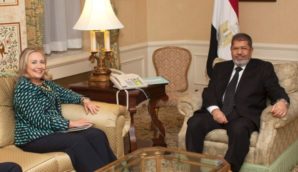 Secretary of State Hillary Clinton meets with then President Morsi of Egypt – a terrorist supporter of the Muslim Brotherhood.

On April 30, 2014 Rep. Louie Gohmert of Texas asked for and was granted permission to address the United States House of Representatives for a few minutes regarding radical Islam:

“Mr. Speaker, there is a lot going on in the world right now, and America seems to continue to lose credibility around the world when we travel abroad, and we have leaders from other countries, especially moderate Muslim allies and friends, who wonder why we are not helping in the war against terrorism, the war against radical Islam. Moderate Muslims realize what it is. It is radical Islam. It is exactly what the wonderful people of Egypt rose up and rebelled against by the millions. In fact, there were more millions of Egyptians that signed a petition in support of removing Morsi than even he ever claimed voted for him.

The Muslim Brotherhood responded, and they have burned churches, and they have persecuted Christians and Jews. The Coptic Christian Pope has told us of his concern about his support for radical Islam because the United States and even a couple of Republican Senators down the hall had supported, seemed to support, went over and said: let’s release Morsi. They seemed to want Muslim Brotherhood back in charge.

So it was shocking for this administration to say we are not going to supply the military equipment to those who are against radical Islam that we had agreed to provide to those who represent radical Islam–the Muslim Brotherhood.

Yes, their party–their political party in Egypt is called the Freedom and Justice Party because, under their definition, freedom means the freedom to worship only Allah and justice means only justice that comes from shari’a law, so they have a little different definition of freedom and justice.

In their less than 100-year history as an entity, the Muslim Brotherhood has killed so many innocent children, women, and men who had no grievance or gripe with Islam, but it should also be noted that one of the reasons that moderate Muslims are so supportive of our effort to stop radical Islam is because, whenever a moderate Muslim stands up to radical Islam, they immediately go to the front of the line to be killed or persecuted by radical Islamists, so we share that”, said Rep. Gohmert (source: Congressional Record http://thomas.loc.gov/).