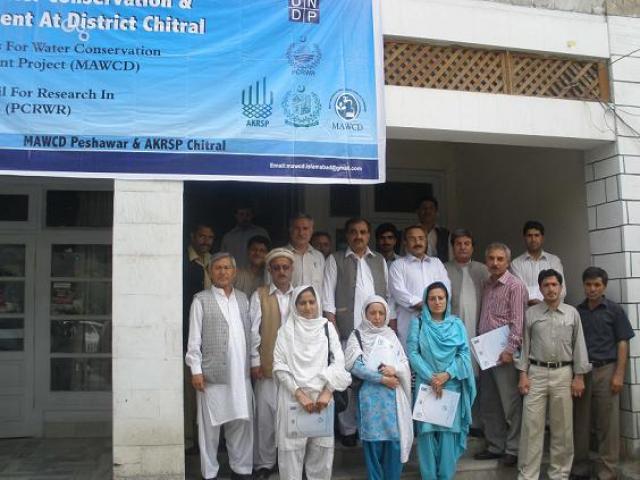 CHITRAL: A day long sensitization seminar on water conservation and development was held here in a local hotel. The seminar was organized by Mass Awareness for water conservation and Development Project (MACDP), Pakistan Council for research in water resources (PCRWR) in collaboration with AKRSP Chitral. The speakers emphasized on awareness rising among the masses regarding water conservation and development as well as preservation of existing resources. They said that water scarcity is a great issue not only of the country but the issue is rising on world level. They said that we should to plan sustainable mechanism for conservation of water resources. The speakers stressed on sharing of indigenous knowledge for adopting old traditional ways for solving of water scarcity problems. They said that several diseases are spreading from contaminated water. They said that community awareness, involvement and their mobilization is mailing stone for solving this issue. They also proposed for holding debates on water issue on national and international level to seek its tangible solution. As we have only 0.5% fresh water and we have to use it with great care the speakers said. Those who spoke on the occasion were Engineer Sardar Ayub Regional Program Manager of AKRSP, Dr. Inayatullah Faizi a local intellectual, Engineer Samar Gul Regional Program Director of MAWCD), Shabbir Ahmad Khan Regional Manager. A large number of men and women folk participated in the seminar.

ATA moved Islamabad to participant in set it.

All teachers Association Chitral under supervision of Ziauddin president ATA Chitral moved for Islamabad to participate in set in against non implementation on recommendations of Pay and pension committee in front of parliament house Islamabad. A large number of teachers of ATA departure today to reach Islamabad and to participate in protest.

CHITRAL: To recognize and pay rich tribute to martyrs of Chitral Scouts (local paramilitary forces) a football tournament with the name of Shuhadai Chitral Scouts Football Tournament 2010 was held here in Chitral scouts football ground near cantonment Chitral. Some 18 football teams participated in the tournament but there was no entry fee for this champion trophy. They were distributed in 4 pools and 8 teams superseded knock out. The final match was played between Jughor Football Club team and Faizabad Football team. Players of both teams plaid very interesting match and no goal was scored until the last time. Hence the jury committee decided for giving them 10 minutes extra but score board remained the same and finally they were given last opportunity of penalty kicking. In first round both the teams scored 4 goal and 1 missing but in last round Jughor football team won the match with one sudden death penalty and defeated Faizabad Football team. Talking to this scribe Major Waseem Sarwar chief Organizer of the tournament said that main objective of this tournament is to pay rich tribute to Martyrs of Chitral Scouts and to promote football game in the district.
Major Naeem of ISI and Shahzada Farhad exhibited paragliding with a great excellence way who enthralled thousands of spectators. Commandant Chitral scouts Col Zaffar Iqbal Kisyana was chief guest who awarded rupees 20000 to winner team and 10000 to runner up team along with giving them trophy and cup. Besides him DCO Chitral Rahmatullah Wazir, DPO Muhammad Jaafar civil and military officers and thousands of spectators were present in play ground to enjoy from this interesting match.
G.H. Farooqi PO Box No. 50 GPO Chitral Pakistan phone NO. 03025989602, 0943-302295, 414418,
Email: gulhamad@gmail.com