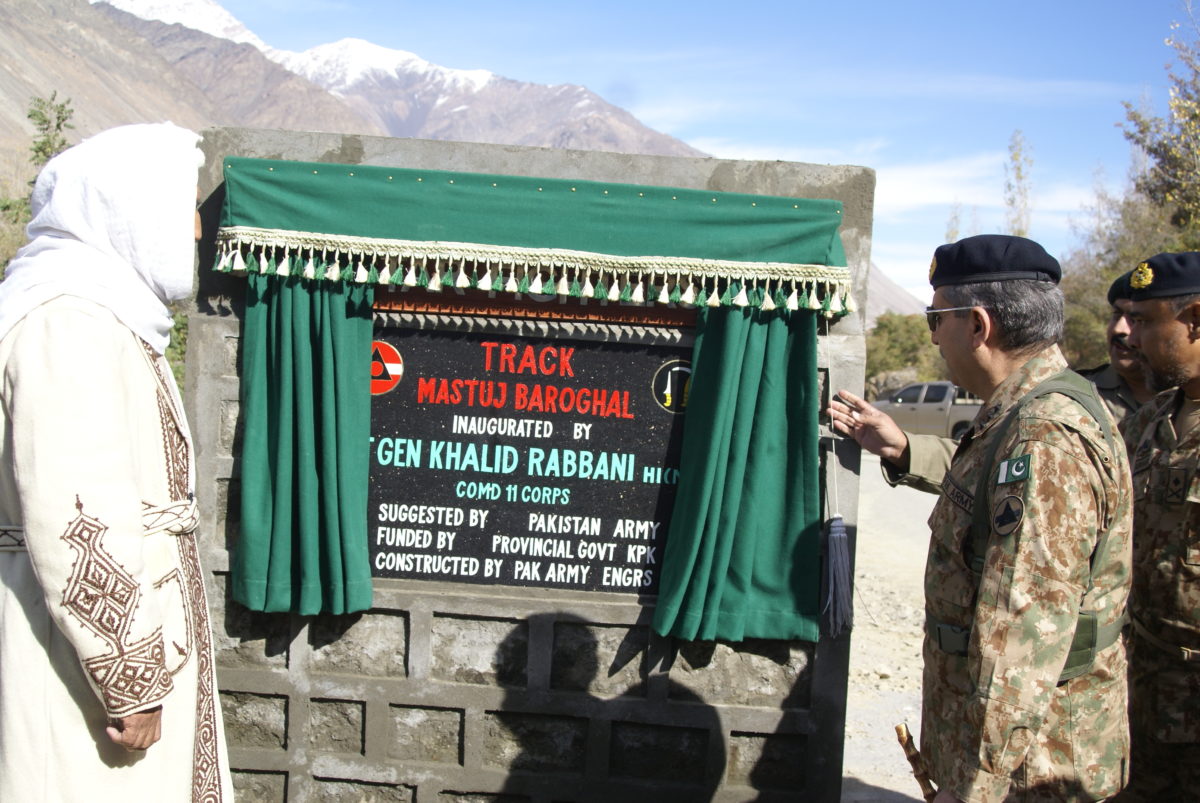 CHITRAL: Corps commander 11 Corp Lieutenant General Khalid Rabbani inaugurated Brughul Road at upper Chitral. This 140 KM long road linked Brughul people to Chitral who remained besieged for months in past due to no road. Brughul is the last valley of Chitral near Tajikistan border. The road completed with a cost of 158.76 Million rupees. Corp commander was received by General Officer commanding (GOC) Major General Syed Bukhari at Mastuj helipad. Elites of the area gathered in a local hotel and Qazi of Mastuj in his welcome address welcome him and demanded from the Corp commander for extending developmental network in the area. He thanked of Army Engineering Corp for early completion of this road. He also strongly criticized C&W department who use delay tactics for getting their commission he also alleged that C&W have embezzled a huge amount on Booni Shandor road which has been shown blacktop only in paper but the road in a very dilapidated condition and still earthen having big ditches in its middle. Haji Muhammd Dawood presented Chitrali cloak and cap as traditional gift to Corp commander.

Addressing to the local elites Corp commander Lt Gen Khalid Rabbani said that this is first step towards development and this road will be termed as mailing stone for uplifting of this backward and neglected area. He said that these people linked with other parts of Chitral after 60 years. He appreciated people of Broghul that despite of their deprive and   neglecting by authority they still hoisting flag of Pakistan and they are real and loyal Pakistani. He said that I was very shocked during my previous visit when I knew that people reach Chitral in 5 days from Brugul in summer season and the road remain block in winter due to heavy snowfall. He hailed people of Chitral for peace loving and stressed upon that to not allow any miscreant to disturb this peaceful environment and peace is only way for development of an area. They also offer Fatiha for the soul of Sadiqullah Shaheed who martyred on Broghul road when his bulldozer fell down in ravine during construction of the road. He  appreciated 104 Engineering Corp of Pakistan Army who completed this road in stipulated period of Time. He directed Brigadier Arif of Engineering Corp to complete the remaining portion of the road. He said that we will try to allocate fund for next annual development plan for including more developmental schemes of this backward area.

Corp commander also handed over cheque worth Rs: 500000 to bereaved family of Sadiqullah as compensation who died during construction of this road. He also visited Brughul valley in military helicopter and meet elites where he was warmly welcomed by people of the area. Local people demanded for construction of remaining portion of 16 KM to reach the road to the last corner of Brughul valley. He assured the local and directed his staff for arrangement of completing the road and also assured for blacktopping this road. He directed Deputy Commissioner Chitral Muhammad Shuaib Jadoon for giving priority in recruitment of border police and levy from this remote border area. Corp Commander also visited headquarters Chitral Scouts and meet Commandant CS colonel M. Naeem and left for Peshawar in chopper.  Corp Commander also meet soldiers at Mastuj and asked about their problems for redressing. People of Chitral thanked Corp Commander. During his visit besides military officers DC Chitral XEN C& W and elites of the area were also present there to welcome him. 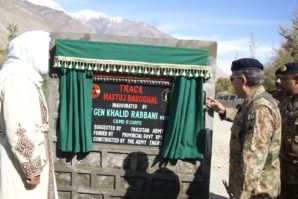