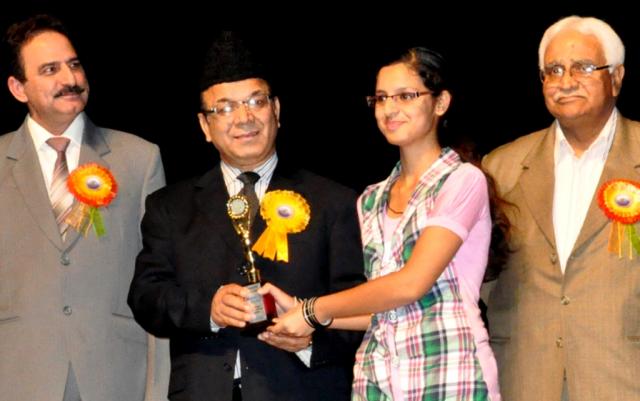 Moral education equally imperative for dev of child: Rather

“All-round personality development of a child is not possible unless moral education is co-opted with mental and physical education,”.  Rather said while speaking at the Annual Day function of Coventry Scholars, held in the General Zorawar Singh Auditorium, in today. He said academic and extra-curricular activities together are vital for widening the horizon of thought.

Rather, who was Chief Guest on the occasion, said that religion should not be separated from the education because moral education is also imperative for all-round personality development of a child.

Rather said that in the present era of massive knowledge explosion, it is required to equip the children with modern education as well as extracurricular activities to enable them compete stiff competition ahead. He also called for a congenial atmosphere in the educational institutions that could help a child to express himself fully to exhibit his talent. In this connection, he said, the role of teacher is of primary importance as his every act has a long-lasting impact on the mind of a child which is like a clean state. He said parent’s role in personality development of a child is also vital adding that “cradle is the first school where education of a child starts”. He said both teachers and parents should contribute with responsibility for the noble cause of education and teaching.

Rather also urged for introducing games in educational institutions in a big way to imbibe a spirit of sportsmanship, confidence and discipline among the children adding that these qualities are necessary for an efficient administrator and a successful person in the life.

The Minister appreciated the management of the school for providing all the modern educational facilities including labs, computers, sports equipment and yoga classes to the students for enhancing their academic excellence as well as mental and physical fitness.

The tiny tots of the school presented a scintillating cultural programme which enthralled the audience. Famous Kashmiri poet, Dina Nath Nadim’s opera “”Vyath Aye Mehren Sonye” and “Bumbroo-Bumbroo” in addition to ‘Darya Kinaray’ and ‘Ghoomar’ were special attractions of the cultural bonanza presented by the students.

The Minister announced a cash prize of Rs. one lakh in favour of the best performing students of the school in academics and extracurricular activities.

Filed under: Media & Tech, World
Share Tweet Pin G Plus Email
previous article: IMG-Reliance May Partner With Chelsea FC For Developing Its Football Academy In India
next article: Krishnadeavaraya was a talented army commander and an expert statesman