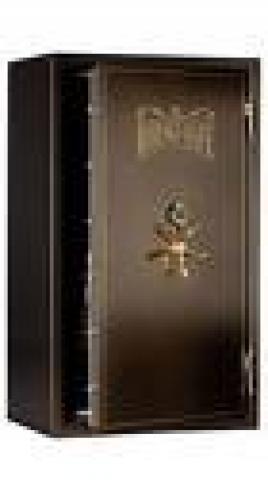 The attempt to keep one’s treasures in a specially protected place, away from all harm, is natural to all creatures. Human beings developed the `safe’ over a long period of time after much trail and error. A safe has now come to mean any large room or box which is used to keep valuables secure. Only the owner of the safe can open it to get his or her valuables. A safe is generally fitted with a vertical door, which is different from a lid.

Soon after locks were invented, in ancient Egypt boxes with lids were used to store precious things.  But the earliest examples of safes are from the medieval ages in Europe. These safes were made of hard wood and bound with strips of hammered iron for strength and decoration. They were artistic rather than secure.  Some European iron boxes had very fine craftsmanship but again they were not secure. Several examples of these safes, supposed to be of seventh century workmanship, are still preserved in museums. Cast-iron chests began to be made in England in early nineteenth century.

Soon after this, safes began to be constructed with thicker materials and more attention began to be paid to their locking system. More people began to buy safes because, with a growth in trade and industry, people ad more valuable which they needed to protect. After this, people tried to make fire-proof safes. Charles Chubb was the first person to successfully make a fire –proof safe.

In 1860, a patent was taken out by a safe manufacturer called Samuel Chatwood for a new, improved safe. It had an inner and outer body, with the space in between filled with a molten iron alloy of 5 centimeters thickness. The conical holes in the locking system made it impossible to be drilled through because the drill would get stuck in the soft alloy.

This safe was very expensive to make and the price was so high that it was not until the Cornhill burglary that Chatwood could sell even one. The interesting thing is that it is still in demand for the safe-keeping of diamonds because it is the only drill-proof safe known.