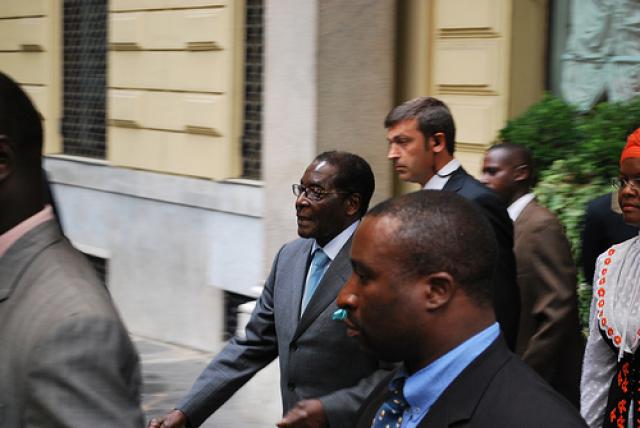 Party insiders said there are two groups having differences of opinion over how to go about the September 15 agreement, aimed at ending the country’s decade-long political and economic crisis.

The MDC and ZANU PF signed a Memorandum of Understanding (MoU) that facilitated for dialogue brokered by former South African President Thabo Mbeki in a bid to share power between the two parties following a stalemate that arose from the chaotic runoff elections held in June 27.

But almost four months down the line, most Zimbabweans have lost faith in the deal; as nothing is materializing after ZANU PF held on to key Defence and Home Affairs Ministries.

Sources say a faction of moderates-headed by feared retired army general Solomon Mujuru, husband to vice president Joyce-is arguing that president Mugabe should ‘concede to the MDC’s demands’ and form a political settlement that would avert a deepening humanitarian crisis in the Southern African county, once revered as the breadbasket of the region.

The other faction of hardliners and ‘hawks’, led by Minister of Rural Housing and Social Amenities Emerson Munangagwa-who violently propelled Mugabe’s re-election in a bloody runoff election that saw the MDC pulling out-is clinging on to power as they believe they would rule the country after the ageing president steps down.

“The differences have now deepened. The Mujuru camp is saying president Mugabe should give in to the MDC’s demands, while the Munangagwa faction, consisting of hawks and opportunists, still wants to hold on to power,” a highly placed source privy to the developments said.

In Bulawayo, Matabeleland province’s capital city, some senior ZANU PF members defected from the party as they are reviving their party-ZIPRA-which fought side by side with ZANU PF in the country’s guerilla warfare.

ZIPRA-then led by late vice president Joshua Nkomo-and ZANLA latter combined to form one party-ZANU PF-in a unity accord which political scientists said was a marriage of convenience that saw ZIPRA being swallowed.

Former intelligence supremo and Home Affairs Minister Dumiso Dabengwa, together with other party heavies from the province have ever since not turned back, despite President Mugabe’s attempt to lure them back.

In Masvingo, politburo member and former senator, Dzikamai Mavhaire, also threatened to quit the party and form a splinter group of disgruntled members.

But ZANU PF secretary for Information, Nathan Shamuyarira, denied the fissures, saying all was well in the party.

“We debate on how to handle the talks with the politburo, the party’s highest decision making body, and we make resolutions there. There are no divisions, although there is the ZIPRA revival, it’s not a breakaway. There are no people threatening to breakaway,” Shamuyarira said in an interview last week.