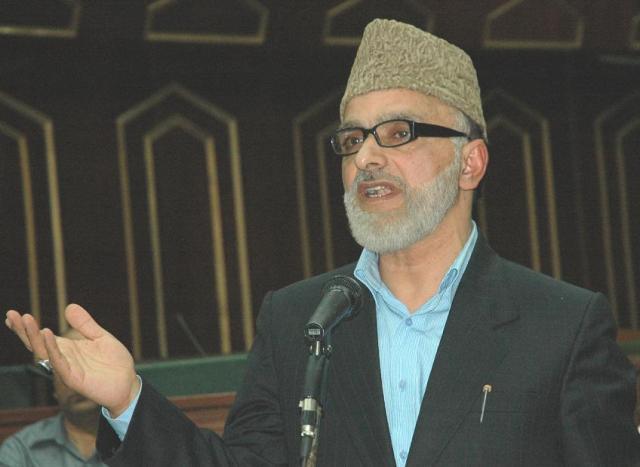 Jammu, March 04 (Scoop News)- J&K Minister for Law and Parliamentary Affairs,  Ali Mohammad Sagar while calling for synergistic approach and not for scoring political mileage, he said that every member has to supplement and consolidate the peace initiatives to create conducive atmosphere in the State.He emphasized for sincere effort to mitigate the sufferings of people and creating a conducive atmosphere for zero Human Rights violations in the State.

The Minister was responding to the clubbed resolution moved by  Javaid Mustafa Mir and  Nizam-ud-Din Bhat regarding withdrawal of security from civilian areas and recommendation to be made to the centre for revocation of Armed Forces Special Act (AFSPA) in the Legislative Assembly today.

The Minister said that the State has passed through a turbulent period during the turmoil where many families were uprooted and thousands of people killed. The Minister said that Omar led coalition Government has quickly responded to the security related incidents that happened at Bomai Pakherpora, Baramulla and Nishat where enquires were conducted and the persons responsible for such incidents booked, adding that it was for the first time during the past 20-years that security forces handed over its personal to the local police for interrogation in the killing of a young boy. He also described the surrender of  Birdi, Commandant of BSF, to the authorities today as historic in the past 20 years..

Regarding, revocation of Armed Forces Special Power Act (AFSPA),  Sagar said that the efforts have already been put in to bring State police to the forefront and added that the political leadership of State shall work for ensuring peaceful environment in this context, he also referred to the statements of the Prime Minister and the Home Minister maintaining that the local police will get more prominent role in dealing with the situation..

The Minister also informed the House that the security forces have vacated 311 buildings, 590 private houses, 30 hotels and 8 cinema halls in the State so far.

He said that the Government has already taken initiatives with regard to relocation of the forces adding that security forces have already been withdrawn from the areas where normalcy has been restored.

However, both the resolution were rejected by voice vote.

Filed under: Politics, World
Share Tweet Pin G Plus Email
previous article: Mebooba demand the withdrawal of forces & revocation of AFSPA in J&K
next article: All Vashno Devi pilgrims gets insured by Shrine Board