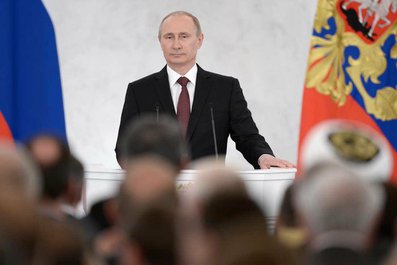 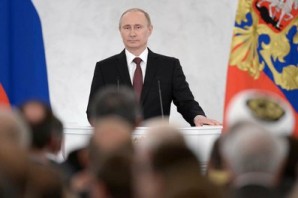 “Dear friends, we have gathered here today in connection with an issue that is of vital, historic significance to all of us. A referendum was held in Crimea on March 16 in full compliance with democratic procedures and international norms.

More than 82 percent of the electorate took part in the vote. Over 96 percent of them spoke out in favour of reuniting with Russia. These numbers speak for themselves.

To understand the reason behind such a choice it is enough to know the history of Crimea and what Russia and Crimea have always meant for each other.

Everything in Crimea speaks of our shared history and pride. This is the location of ancient Khersones, where Prince Vladimir was baptised. His spiritual feat of adopting Orthodoxy predetermined the overall basis of the culture, civilisation and human values that unite the peoples of Russia, Ukraine and Belarus. The graves of Russian soldiers whose bravery brought Crimea into the Russian empire are also in Crimea. This is also Sevastopol – a legendary city with an outstanding history, a fortress that serves as the birthplace of Russia’s Black Sea Fleet. Crimea is Balaklava and Kerch, Malakhov Kurgan and Sapun Ridge. Each one of these places is dear to our hearts, symbolising Russian military glory and outstanding valour.

Crimea is a unique blend of different peoples’ cultures and traditions. This makes it similar to Russia as a whole, where not a single ethnic group has been lost over the centuries. Russians and Ukrainians, Crimean Tatars and people of other ethnic groups have lived side by side in Crimea, retaining their own identity, traditions, languages and faith.

Incidentally, the total population of the Crimean Peninsula today is 2.2 million people, of whom almost 1.5 million are Russians, 350,000 are Ukrainians who predominantly consider Russian their native language, and about 290,000-300,000 are Crimean Tatars, who, as the referendum has shown, also lean towards Russia.

True, there was a time when Crimean Tatars were treated unfairly, just as a number of other peoples in the USSR. There is only one thing I can say here: millions of people of various ethnicities suffered during those repressions, and primarily Russians.

Crimean Tatars returned to their homeland. I believe we should make all the necessary political and legislative decisions to finalise the rehabilitation of Crimean Tatars, restore them in their rights and clear their good name.

We have great respect for people of all the ethnic groups living in Crimea. This is their common home, their motherland, and it would be right – I know the local population supports this – for Crimea to have three equal national languages: Russian, Ukrainian and Tatar.

In people’s hearts and minds, Crimea has always been an inseparable part of Russia. This firm conviction is based on truth and justice and was passed from generation to generation, over time, under any circumstances, despite all the dramatic changes our country went through during the entire 20th century.

After the revolution, the Bolsheviks, for a number of reasons – may God judge them – added large sections of the historical South of Russia to the Republic of Ukraine. This was done with no consideration for the ethnic make-up of the population, and today these areas form the southeast of Ukraine. Then, in 1954, a decision was made to transfer Crimean Region to Ukraine, along with Sevastopol, despite the fact that it was a city of union subordination. This was the personal initiative of the Communist Party head Nikita Khrushchev. What stood behind this decision of his – a desire to win the support of the Ukrainian political establishment or to atone for the mass repressions of the 1930’s in Ukraine – is for historians to figure out.

What matters now is that this decision was made in clear violation of the constitutional norms that were in place even then. The decision was made behind the scenes. Naturally, in a totalitarian state nobody bothered to ask the citizens of Crimea and Sevastopol. They were faced with the fact. People, of course, wondered why all of a sudden Crimea became part of Ukraine. But on the whole – and we must state this clearly, we all know it – this decision was treated as a formality of sorts because the territory was transferred within the boundaries of a single state. Back then, it was impossible to imagine that Ukraine and Russia may split up and become two separate states. However, this has happened.

Unfortunately, what seemed impossible became a reality. The USSR fell apart. Things developed so swiftly that few people realised how truly dramatic those events and their consequences would be. Many people both in Russia and in Ukraine, as well as in other republics hoped that the Commonwealth of Independent States that was created at the time would become the new common form of statehood. They were told that there would be a single currency, a single economic space, joint armed forces; however, all this remained empty promises, while the big country was gone. It was only when Crimea ended up as part of a different country that Russia realised that it was not simply robbed, it was plundered.

At the same time, we have to admit that by launching the sovereignty parade Russia itself aided in the collapse of the Soviet Union. And as this collapse was legalised, everyone forgot about Crimea and Sevastopol ­– the main base of the Black Sea Fleet. Millions of people went to bed in one country and awoke in different ones, overnight becoming ethnic minorities in former Union republics, while the Russian nation became one of the biggest, if not the biggest ethnic group in the world to be divided by borders.

Now, many years later, I heard residents of Crimea say that back in 1991 they were handed over like a sack of potatoes. This is hard to disagree with. And what about the Russian state? What about Russia? It humbly accepted the situation. This country was going through such hard times then that realistically it was incapable of protecting its interests. However, the people could not reconcile themselves to this outrageous historical injustice. All these years, citizens and many public figures came back to this issue, saying that Crimea is historically Russian land and Sevastopol is a Russian city. Yes, we all knew this in our hearts and minds, but we had to proceed from the existing reality and build our good-neighbourly relations with independent Ukraine on a new basis. Meanwhile, our relations with Ukraine, with the fraternal Ukrainian people have always been and will remain of foremost importance for us.(Applause)

Today we can speak about it openly, and I would like to share with you some details of the negotiations that took place in the early 2000s. The then President of Ukraine Mr Kuchma asked me to expedite the process of delimiting the Russian-Ukrainian border. At that time, the process was practically at a standstill.  Russia seemed to have recognised Crimea as part of Ukraine, but there were no negotiations on delimiting the borders. Despite the complexity of the situation, I immediately issued instructions to Russian government agencies to speed up their work to document the borders, so that everyone had a clear understanding that by agreeing to delimit the border we admitted de facto and de jure that Crimea was Ukrainian territory, thereby closing the issue.

We accommodated Ukraine not only regarding Crimea, but also on such a complicated matter as the maritime boundary in the Sea of Azov and the Kerch Strait. What we proceeded from back then was that good relations with Ukraine matter most for us and they should not fall hostage to deadlock territorial disputes. However, we expected Ukraine to remain our good neighbour, we hoped that Russian citizens and Russian speakers in Ukraine, especially its southeast and Crimea, would live in a friendly, democratic and civilised state that would protect their rights in line with the norms of international law.

However, this is not how the situation developed. Time and time again attempts were made to deprive Russians of their historical memory, even of their language and to subject them to forced assimilation. Moreover, Russians, just as other citizens of Ukraine are suffering from the constant political and state crisis that has been rocking the country for over 20 years.”