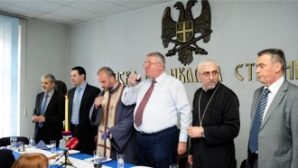 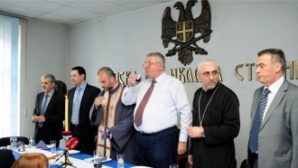 Honorable events dedicated to the third anniversary of Crimea’s “reunion” with Russia were held in Crimea and in Russia last week.

Let’s remind that on March 16, 2014 Russia hold so-called referendum on attaching the peninsula to Russia in the annexed Crimea and on March, 21 the President of the Russian Federation Vladimir Putin signed a decree declaring it a part of Russia.

In order to legitimize the annexation primarily for Russians and Crimean citizens and in honor of an anniversary of faked referendum held at the points of rifles, the Russian authorities decided to invite different political marginals and dropouts of all stripes to Crimea. Initially Russian media reported the participation of more than 20 representatives from different European, Asian and Latin American states, however, only a few of them agreed to participate in festive events.

Among those who visited the annexed peninsula bypassing international regulations and Ukrainian legislation the representatives of Serbia stand out as its delegation appeared to be the most numerous. What can be said only about Aleksandar Šešelj – Serbian radical nationalist and revanchist, whose father Vojislav Šešeljin actively participated in ethnic cleansings on Balkans (Kosovan Albanians, Croatians) in 1990s. Mr. Šešelj’s colleague and like-minded fellow, former Serbian Health Minister Milovan Bojić, made his mark in participation in far-reaching corruption scandal, inflicting multimillion losses to its country. Needless to say how many Serbians paid with their lives for the Bojić’s desire to taste the sweets of high living! Serbian professor of Russian language Dubravko Bojić also prefers engaging in propaganda of nationalistic ideas of the Great Serbia along with the calls to keep friendly terms with Russia instead of discovering to the students the contribution of Russian writers to the world literature. It goes without saying that he is also a member of Serbian Radical Party.Another person worth to be mentioned, is SrdaTrifcovic, who is American citizen, but still has not adopted the values of democratic world. The position of councilor of formerYugoslavian president Kostunica must have asserted influence over him for sure. He still has a lot of hate for Muslims and tells that Yugoslavia was terminated by western capitalists and makes appeal to start new war in the region. We have to reckon that the presence of Serbian representatives at the peninsula, occupied by Russian forces is not surprise for anyone, taking into account the “warm” relations between Serbia and Russia.

What a surprise was to see the lieges of the UK in Crimea. The local British politician Nigel Sussman (North Westminster), the successor of Russian immigrants who escaped from Russia to survive at the time of massacre handled by communists, fights for the rights of Russian community in the Kingdom up to authorizing them to change international policy of the UK and to cancel the sanctions against Russia.

Another pro-Russian lobbyist and the member of “Crimean delegation” is Richard Wood, who has large contacts with Russian establishment. In the early 1990s together with the party bureaucrats he even arranged the illegal export of Russian wood.

If we pay attention to these “foreign guests”, it is clear that there is no international allowance, though Russian medias will express the opposite ideas.
These marginals and well-payed lobbyists just earned money for themselves and for their organizations.

By arranging such events, Russia tries to legitimatize the annexation of Crimean peninsula, to persuade the world community that the integration of Crimea in the Russian political and business world is no-reversible, to persuade that Crimea will never be Ukrainian again. Such PR-events just make the vision that more and more politicians stand for recognizing Crimea as Russian territory. All these actions are done by Russia with the only objective – to have sanctions cancelled, as they ruin its economy and destabilize political situation inside the country.